The Story of the Chinese Zodiac

There are many different versions of the Chinese Zodiac story, but we've chosen one which tells of a race between the animals. You can listen to it, print it out and enjoy activities relating to the story below. 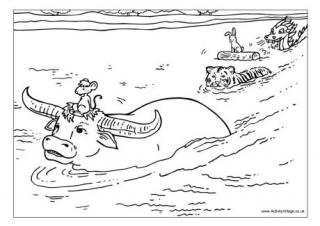 There is a story which explains why the Rat is the first animal year of the Chinese zodiac. Here is a colouring page of the story to enjoy!

This Chinese themed story paper includes an illustration of the story behind the animals of the Chinese zodiac. 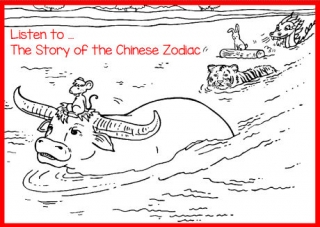 Listen to the story of the Chinese Zodiac, read for us by a young man from China. You might want our printable version of the story to read along. 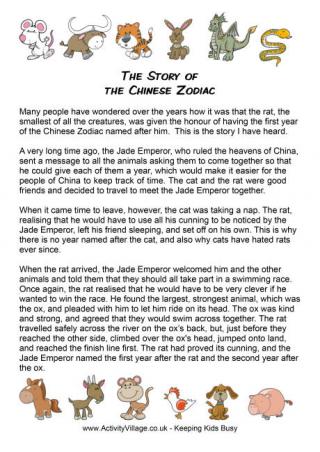 Here's a printable version of our telling of the Story of the Chinese Zodiac. Fun to read with the kids, and designed to be accompanied by our many printable activities...

How the 12 years of the Chinese Zodiac got their names

Many people have wondered over the years how it was that the rat, the smallest of all the creatures, was given the honour of having the first year of the Chinese Zodiac named after him. This is the story I have heard.

A very long time ago, the Jade Emperor, who ruled the heavens of China, sent a message to all the animals asking them to come together so that he could give each of them a year, which would make it easier for the people of China to keep track of time. The cat and the rat were good friends and decided to travel to meet the Jade Emperor together.

When it came time to leave, however, the cat was taking a nap. The rat, realising that he would have to use all his cunning to be noticed by the Jade Emperor, left his friend sleeping, and set off on his own. This is why there is no year named after the cat, and also why cats have hated rats ever since.

When the rat arrived, the Jade Emperor welcomed him and the other animals and told them that they should all take part in a swimming race. Once again, the rat realised that he would have to be very clever if he wanted to win the race. He found the largest, strongest animal, which was the ox, and pleaded with him to let him ride on its head. The ox was kind and strong, and agreed that they would swim across together. The rat travelled safely across the river on the ox’s back, but, just before they reached the other side, climbed over the ox's head, jumped onto land, and reached the finish line first. The rat had proved its cunning, and the Jade Emperor named the first year after the rat and the second year after the ox.