The Story of the Phoenix

In the Book of the Ten Thousand Wonders there are three hundred and thirty-three stories about the Phoenix, and this is one of them.

Printable version of The Story of the Phoenix (3 pages, pdf file)

The Story of the Phoenix

Ta-Khai, Prince of Tartary, dreamed one night that he saw in a place where he had never been before an enchantingly beautiful young maiden who could only be a princess. He fell desperately in love with her, but before he could either move or speak, she had vanished. When he awoke he called for his ink and brushes, and drew her image on a piece of precious silk, and in one corner he wrote these lines:

The flowers of the pæony
Will they ever bloom?
A day without her
Is like a hundred years.

He then summoned his ministers, and, showing them the portrait, asked if any one could tell him the name of the beautiful maiden; but they all shook their heads and stroked their beards. They did not know who she was.

So displeased was the prince that he sent them away in disgrace to the most remote provinces of his kingdom. All the courtiers, the generals, the officers, and every man and woman, high and low, who lived in the palace came in turn to look at the picture. But they all had to confess their ignorance.

Ta-Khai then called upon the magicians of the kingdom to find out in magic ways the name of the princess of his dreams, but their answers were so widely different that the prince condemned them all to have their noses cut off. The portrait was shown in the outer court of the palace from sunrise till sunset, and travellers from all over the world came in every day, gazed upon the beautiful face, and came out again. No-one could tell who she was.

Meanwhile the days were weighing heavily upon the shoulders of Ta-Khai, and he became very unhappy; he forgot to eat, he forgot to drink, and he even forgot which was day and which was night, what was in and what was out, what was left and what was right. He spent his time roaming over the mountains and through the woods crying aloud to the gods to end his life and his sorrow.

It was in this way, one day, that he came to the edge of a cliff. The valley below was scattered with rocks, and the thought came to his mind that he had been led to this place to put and to his misery. He was about to throw himself into the depths below when suddenly a Phoenix flew across the valley and appeared before him, saying:

Why are you, a mighty Prince, standing here, looking so sad?

Ta-Khai replied: Nothing matters to me now but finding the beautiful girl for whom my heart is thirsting, but how can I find her?

And he told the bird his story.

Without the help of Supreme Heaven it is not easy to acquire wisdom, but it is a sign that Heaven has sent me to help you. I can make myself large enough to carry the largest town upon my back, or small enough to pass through the smallest keyhole, and I know all the princesses in all the palaces of the earth. They all know my song, and I am their friend. Therefore show me the picture, Ta-Khai, and I will tell you the name of the princess you saw in your dream.

They went to the palace, and, when the portrait was shown, the bird became as large as an elephant, and exclaimed, Sit on my back, Ta-Khai, and I will carry you to the place of your dream. There you will find Sai-Jen, the daughter of the King of China, the princess of your dream.

At nightfall they were flying over the palace of the king just above a magnificent garden. And in the garden sat Sai-Jen, singing and playing upon the lute. The Phoenix deposited the prince outside the wall near a place where bamboos were growing and showed him how to cut twelve bamboos between the knots to make a flute with a sound sweeter than the evening breeze on the forest stream.

And as he blew gently across the pipes, they echoed the sound of the princess's voice so harmoniously that she cried:

I hear the distant notes of the song that I sing myself, although I can see nothing but the flowers and the trees. It is a beautiful song, and it sounds very sad, and full of longing.

At that moment the wonderful bird, like a fire of many colours come down from heaven, landed in front of the princess, dropping at her feet the portrait. She opened her eyes in utter astonishment at the sight of her own image. And when she had read the lines inscribed in the corner, she asked, trembling:

Then the bird spoke and told her the story of Ta-Khai's dream, adding:

I come from him with this message; I brought him here on my wings. For many days he has longed for this hour, let him now meet the princess of his dream and heal the wound in his heart.

Sai-Jen fell silent when Ta-Khai stood before her, so great was her love for him. The Phoenix lit up the garden sumptuously, and a breath of love was stirring the flowers under the stars.

It was in the palace of the King of China that were celebrated in the most ancient and magnificent style the nuptials of Sai-Jen and Ta-Khai, Prince of Tartary.

And this is one of the three hundred and thirty-three stories about the Phoenix as it is told in the Book of the Ten Thousand Wonders. 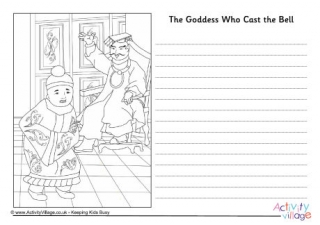 Our story paper gives children a chance to retell the story of The Goddess Who Cast the Bell in their own words, using the colouring pages provided to help them remember how it goes. 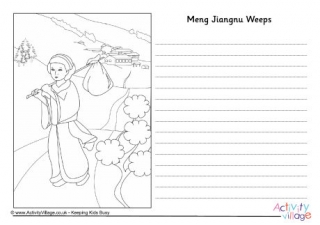 This story paper printable is designed to accompany our version of the traditional Chinese love story, Meng Jiangnu weeps. Children can use it to rewrite the story in their own words, after listening to you read it or reading it online or in printable form themselves. 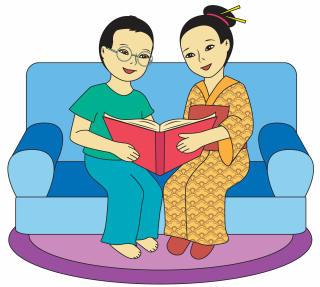