The thistle is a flowering plant with prickles on the leaves and often on the stems too. It's pretty, but it is dangerous! As the thistle is the national flower of Scotland, we've got a collection of thistle activities here at Activity Village to enjoy with the kids. 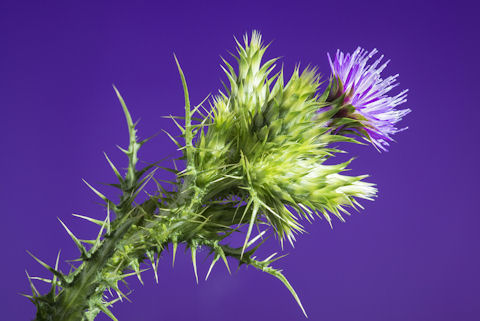 A close-up of a thistle, showing its spikes!

According to legend, a sleeping band of Scots soldiers were saved from certain death when one of the attacking Norse army's soldiers stepped on a thistle in his bare feet, and cried out in pain. His cries awakaned the Scots, who defeated the Norsemen and sent them packing! The thistle saved the day, and was adopted as the flower of Scotland. I wonder if the story is true?

The thistle has been the national emblem of Scotland since the 13th century, 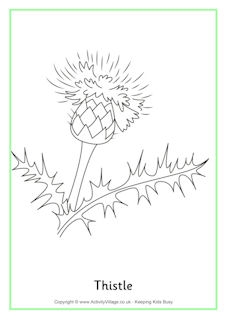 Thistle Colouring Pages
Kids can colour in our thistle colouring page, or have a go at a tracing the word as well as... 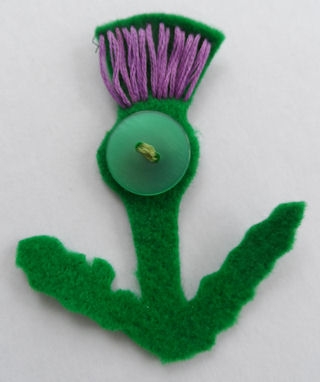 Thistle Crafts
We hope that this lovely collection of thistle crafts will get you inspired. They are perfect for... 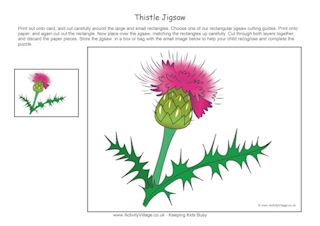 Thistle Printables
Print out a pretty poster, have a go at our thistle jigsaw or grid copy activity, or make use our... 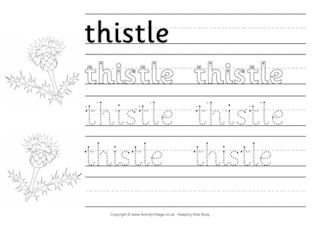 Thistle Worksheets
Children can practise their handwriting with our thistle worksheets, which make a perfect...

The Thistle of Scotland

Chorus: O the Thistle o' Scotland was famous of auld,
Wi' its toorie sae snod and its bristles sae bauld,
'Tis the badge of my country, it's aye dear tae me;
And the thocht o' them baith brings the licht tae my e'e.

Verse: Its strength and its beauty the storm never harms;
It stan's on its guard like a warrior in arms;
Yet its down is as saft as the gulls on the sea,
And its tassie as bricht as my Jeannie's blue e'e.

O, my country, what wonder yer fame's gane afar;
For yer sons ha'e been great baith in peace and in war;
While the sang and the tale live they'll win respect,
The lads 'neath the bonnets wi' thistles bedeckt.

Lang syne the invaders cam owre to our shore,
And fiercely our thistle they scutched and they tore;
When they maist thocht it deid, 'twas then it up bore,
And it bloomed on their graves quite as strong as before.

My blessings be yours! Is there Scotsman ava
Wad stan' by and see ony harm on ye fa'?
Is there gentle or semple wha lives in our land
Wad refuse to drink health to the thistle so grand?