Vincent van Gogh (1853–1890) is one of the world’s most famous artists. Although relatively unknown during his lifetime, his drawings and paintings are now some of the most valuable in the world, and his work has influenced generations of painters. Find out more about this talented but unhappy man, and use our collection of printable resources to test what you have learnt. 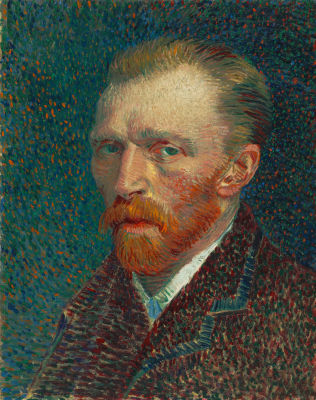 Fun fact: In 1990, van Gogh’s painting Portrait of Dr. Gachet sold for $82.5 million. At the time, it was the most expensive artwork ever sold. The buyer was a 74-year-old Japanese businessman, who died six years later. He said he wanted to have the painting burned and buried with him when he died. Although it is believed the painting survived, no one knows what has happened to it!

“Great things are done by a series of small things brought together.”
Vincent van Gogh

“I dream of painting and then I paint my dream.”
Vincent van Gogh

Vincent van Gogh was born in 1853 in the Netherlands. His father and grandfather were church ministers, but other family members worked in the art industry. Vincent was particularly close to his younger brother, Theo. A lot of what we know about him comes from the letters he wrote to Theo.

Vincent enjoyed drawing as a child but didn’t work as an artist until he was 27. Before then, he worked for an art dealer (his uncle), as a teacher, in a bookshop, in an art gallery and as a missionary.

In 1880, Vincent took his brother Theo’s advice and became a full-time painter. With Theo’s financial and emotional support, he went to study at the Royal Academy of Art in Brussels, Belgium. At first Vincent sketched in pencils or charcoal, and painted in watercolours, but later he experimented with oils. He often drew dark, sad pictures of poor people. When his father died in 1885, Vincent finished his first major work The Potato Eaters – a painting of a peasant family eating dinner.

Vincent moved to Paris when Theo told him about a new style of painting there called Impressionism. He befriended other painters such as Monet, Degas and Pissarro. He also became good friends with the artist Paul Gauguin. He began to use brighter colours in his paintings of the Parisian streets and cafes and the French countryside. He painted many self-portraits, too – it was cheaper to paint himself than to hire a model!

Vincent grew tired of city life, however, and rented a house in Arles, inviting Gauguin to join him. Although they were great friends, the two often argued. After one particularly heated row, Vincent famously sliced off part of his own left ear with a razor blade. Gauguin didn’t stay long after that!

Vincent was deeply religious as a young man, but lost his faith in his late-twenties, and suffered bouts of depression. He became obsessed with his art and neglected his health – smoking and drinking heavily and often forgetting to eat. In 1889, he committed himself to a mental hospital in Saint-Rémy. During this time, he produced over 150 paintings, including Starry Night, one of his most famous pieces, and Irises, which sold for a record $53.9 million in 1987. 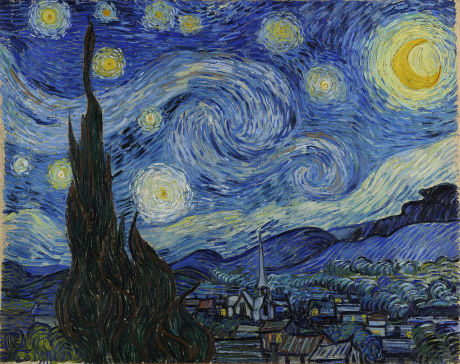 In 1890, Vincent moved to live closer to Theo and to Dr. Gachet, a physician who had treated many artists. Vincent continued to paint but his physical and mental health declined. In July, he shot himself in the chest, dying two days later in Theo’s arms. He was just 37. Theo died from ill health six months later and was buried next to his brother. 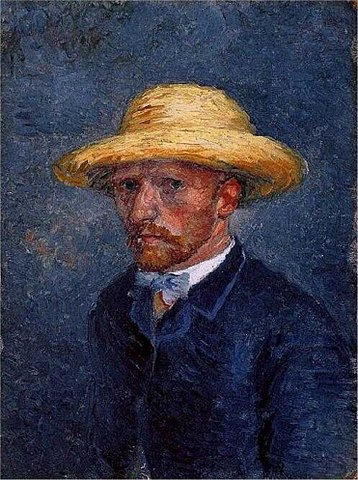 In just ten years, Vincent had produced more than 2,000 paintings, drawings and sketches. His work mixed his observations of the world with his imagination, memories and emotions. Yet he only sold one painting during his lifetime – The Red Vineyard. Vincent died an unhappy man. He never knew the value of his art, and the pleasure he would bring to future generations. 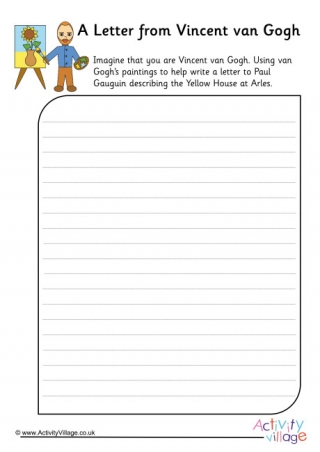 Vincent van Gogh moved to a yellow house in Arles in 1888, and invited fellow artist Paul Gauguin to join him. Vincent loved the sunny weather in Arles and the vibrant colours of the house. Can the children imagine they are Van Gogh describing the house to Gauguin? 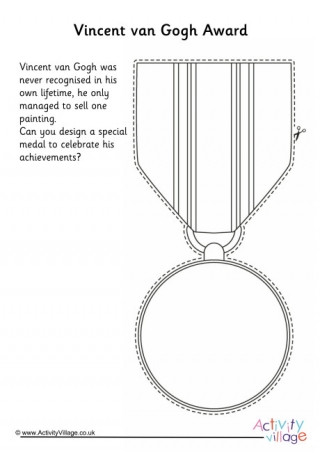 Sadly, Vincent van Gogh's work was not appreciated during his lifetime and he only sold one painting, however many now see him as one of the most influential artists of all time. Here's a chance for you to design him a special award to celebrate his achievements. 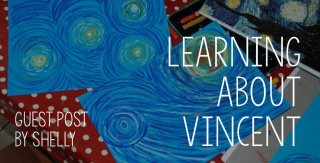 My daughter is currently working on a few art projects and one of them is an Art History project where she has to choose a famous artist whose work she admires and learn about their life and technique. 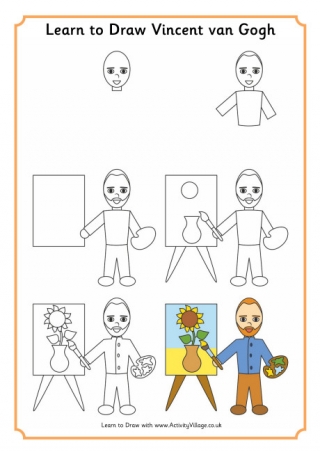 Vincent van Gogh painted over 30 self-portraits between 1886 and 1889. The kids can learn to draw the famous artist themselves using our easy step by step guide. 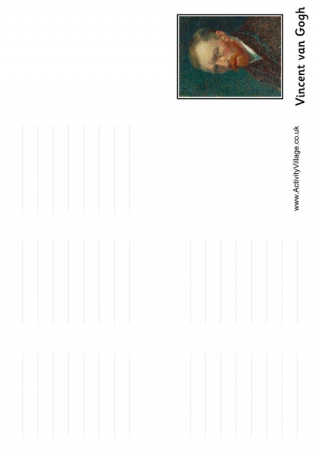 This Vincent van Gogh booklet is an interesting way to record what you learn about the artist's life and work, or perhaps take it with you to write notes if you visit an art gallery? We have blank and lined versions to choose from. 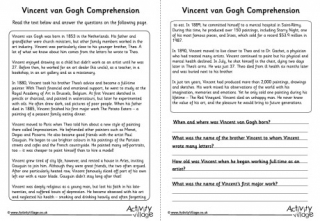 Here's a worksheet aimed at older children that will test their comprehension skills and teach them a little about artist Vincent van Gogh too. They need to read the text, then answer the questions at the end. Here's a fun activity that gets the kids learning about the artist Vincent van Gogh and practising persuasive writing too. Can they design a poster advertising an exhibition of Vincent van Gogh's paintings? Learn a little about the life and work of one of the world's most famous artists, Vincent van Gogh, by reading our factsheet. 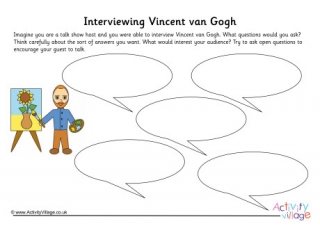 Vincent van Gogh was a fantastic artist and a fascinating person - can you imagine if you could interview him as part of a talk show? What sort of questions would you ask, and what would the audience want to find out? Use our Vincent van Gogh newspaper writing prompt to write a story about the famous Dutch artist. Maybe you could write about how different his life could have been if he had become famous when he was still alive? 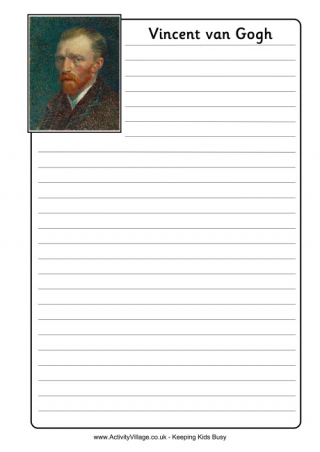 Use these printable notebooking pages to record what you learn about Vincent van Gogh. One of the pages has space for a picture, so you could try and draw your own version of one of his paintings too... My favourite Vincent van Gogh painting is the beautiful "Irises" - but which of his works will the children choose to recreate in our Vincent van Gogh picture gallery? Perhaps "The Starry Night", or "Sunflowers"? Here's a poster to print and display featuring Vincent van Gogh painting one of his most famous works, Sunflowers. "For my part I know nothing with any certainty, but the sight of the stars makes me dream." This quote by artist Vincent van Gogh is set against the background of one of his most famous works, The Starry Night. 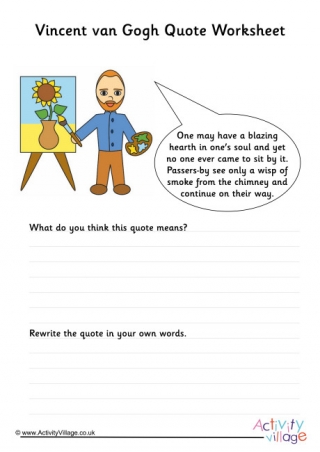 Our simple Vincent van Gogh quote worksheet features a quote by the famous Dutch artist and asks the children to think about what it means and to write it in their own words too. 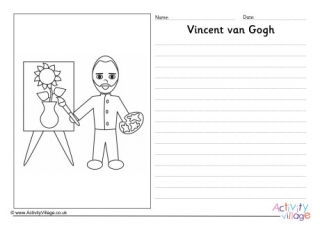 Write about Vincent van Gogh or describe some of his wonderful paintings using our story paper printable. Choose from versions with lines or handwriting lines below. 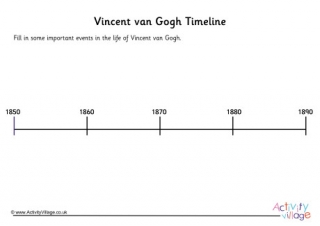 Timelines are a great tool to help us understand history, and tell us what happened and how much time passed between events. Can the kids fill in some important events in Vincent Van Gogh's life on this timeline worksheet? Here's a challenging word search puzzle that's great for older kids. Can you find the words relating to Van Gogh's life and works on the grid? There are some quite tricky words to find, and we've included the solution too if you need it... Here's a simple worksheet which asks the kids to write a little bit about the famous artist Vincent van Gogh, and to list some of his most famous works. It's a great worksheet to fill in if you're learning all about famous artists. Our writing pages are a fun way to start younger children researching and writing about famous people - in this case, the artist Vincent Van Gogh.