William I (1066-1087) was a distant relative of Edward the Confessor and claimed that Edward had promised him the throne of England. When Harold was made king on the death of Edward, William sailed from Normandy in France, where he was Duke, with an army of 7000 men. On the 14th October 1066, William and Harold's armies met at the Battle of Hastings. Harold was killed and his army fled. William became King and became known in history as 'the Conqueror'. William was crowned in Westminster Abbey on Christmas Day 1066.

So that he could tax the citizens of his new kingdom William commissioned the Doomsday Book, which was completed in 1086. It was a survey of all the estates, towns and villages in England at the time. It is very valuable to historians as it tells us where people lived and who owned what.

A gruesome fact!
William died of a stomach injury sustained in battle in France. First all his belongings were stolen, then his funeral was interrupted by a fire. When the fire had been put out they found that his body did not fit into the coffin. When pushing him in, his stomach, which was swollen and filled with pus because of the injury, burst!

William was succeeded by his son William II. 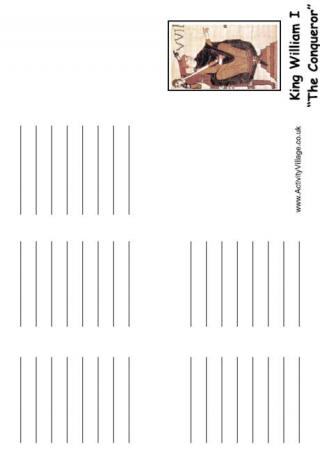 Write what you've learned about William the Conqueror in one of our little foldable booklets. You will need our origami booklet instructions. 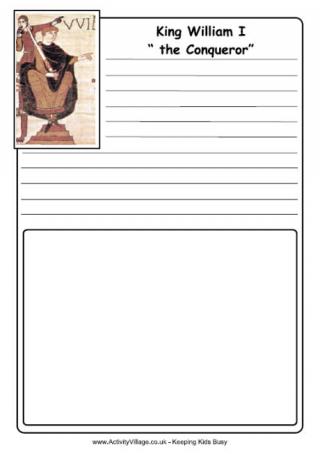 Choose one of our two notebooking pages for your work on William I, better known as William the Conqueror. 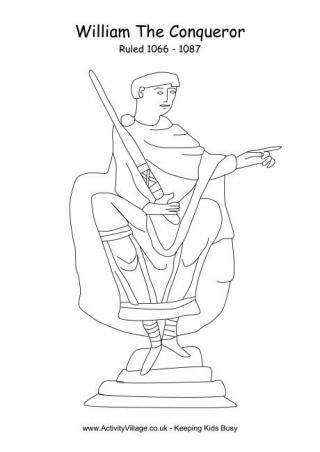 William the Conqueror ruled form 1066 to 1087 and was the first of our Norman kings. Here's a fun colouring page based on his picture in the Bayeux Tapestry.