William Wordsworth (1770–1850) was one of England’s greatest poets. His work is said to mark the beginning of the Romantic period in English literature. Wordsworth introduced a new style of poetry using language that appealed to ordinary people. His poems often portrayed his love of nature as well as his inner thoughts and feelings. Learn more about the life of this expressive man and use our collection of printable resources below to test your knowledge. 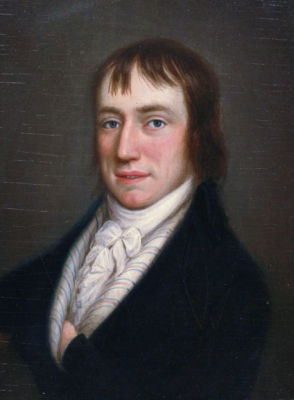 In 2004, nearly a quarter of a million children in the UK took part in a mass reading of one of Wordsworth’s poems, affectionately known as Daffodils. The record-breaking event (called ‘Words Worth Reading’) was held in celebration of the 200th anniversary of the poem’s creation, to raise awareness of poetry amongst young people and to raise money for a cancer charity. Three years later (the 200th anniversary of the poem’s publication), a tourist board in the Lake District released a rap version of the poem on YouTube, to attract visitors to the area.

“Fill your paper with the breathings of your heart.”
William Wordsworth

“Come forth into the light of things,
Let nature be your teacher.”
William Wordsworth

A Short Biography of William Wordsworth

William Wordsworth was born in 1770, in Cockermouth, Cumbria, to a middle-class family. He loved the beauty of the Lake District, and was close to his four siblings, particularly his sister Dorothy. But when William was seven, his mother died and the Wordsworth children were separated and lived with different relatives. William’s father then died five years later. The death of both parents at a young age had a huge impact on William, who recalled feeling lonely as a child.

While studying at Cambridge University, William spent one summer vacation travelling through the Alps, and was overwhelmed by the beauty of the mountains. He returned to France again the following year, and fell in love with a French woman, Annette Vallon. They had a daughter together, Caroline. But tensions between France and Britain meant William had to return home. He continued to support Annette and Caroline throughout his life, but his guilt at leaving them featured in many of his poems.

In 1795, William inherited some money from a friend, which helped to fund his work as a poet. He also moved to Somerset with his sister Dorothy. Dorothy was a poet, too, and wrote many diaries. She was said to have a great influence on William’s writing.

The poet Samuel Taylor Coleridge lived close by in Somerset and became great friends with William. Together they created Lyrical Ballads (1798) – featuring poems such as Coleridge’s Rime of the Ancient Mariner and Wordsworth’s Tintern Abbey. Many consider this to be the start of the Romantic era in English literature.

In autumn 1798, William, Dorothy and Coleridge travelled to Germany. William was homesick and began working on a poem about his life. The Prelude is now regarded as his greatest work – an epic poem (written in 14 books), created over several years. It deals with the experiences that shaped William’s life, and rather fittingly was only published after his death.

In 1799, William and Dorothy moved back to the Lake District, and Coleridge relocated nearby. Some of William’s best work was written in the decade that followed, including one of his most popular poems I Wandered Lonely as a Cloud (commonly called Daffodils).

In 1802, William and Dorothy returned to France. William wanted to tell Annette about his forthcoming marriage to a childhood friend, Mary Hutchinson. He and Mary had five children together, and continued to live with Dorothy who never married.

William was devastated when his brother, John, died in a shipwreck in 1805. Seven years later, tragedy struck again when two of William’s young children passed away. Many of his poems reflect these losses, but when another daughter died in 1847, aged 42, the grief caused William to give up writing completely.

William became the UK’s Poet Laureate in 1843, a position he kept until his death, aged 80, from a lung disease. Although Wordsworth wrote no poetry during this time, his work had already touched the lives of ordinary people, reflecting their everyday experiences as well as their deepest emotions. 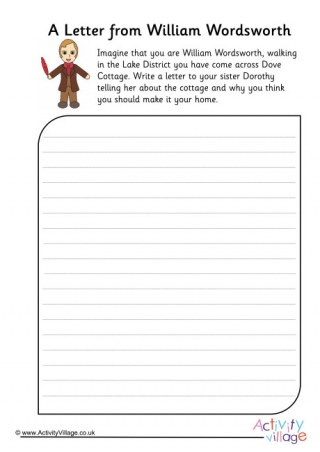 William Wordsworth wrote some of his greatest poetry in Dove Cottage, his beautiful home on the edge of Grasmere in the Lake District. This worksheet asks the children to imagine they are William Wordsworth persuading his sister Dorothy to move to the cottage. 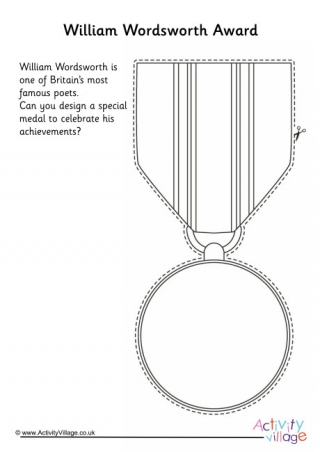 In 1843 Wordsworth was given the honour of becoming Poet Laureate, but what award do you think he deserved? You can design your own here... 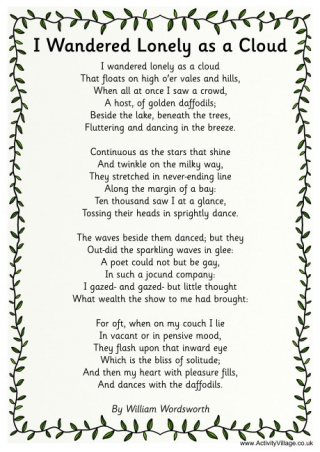 I Wandered Lonely as a Cloud is William Wordsworth's most famous poem and is perhaps one of the well-known poems written in the English language. Wordsworth was inspired to write this lovely poem whilst walking by Ullswater lake on a stormy day with Dorothy, his sister. 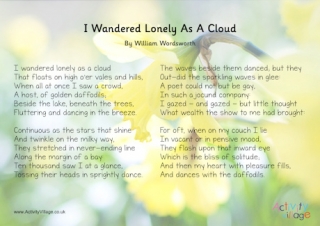 This second printable version of Wordsworth's lovely poem, I Wandered Lonely As A Cloud, works well as a poster or on a whiteboard as well as a hand-out. In the background of the poem, a host of golden daffodils nod their heads... 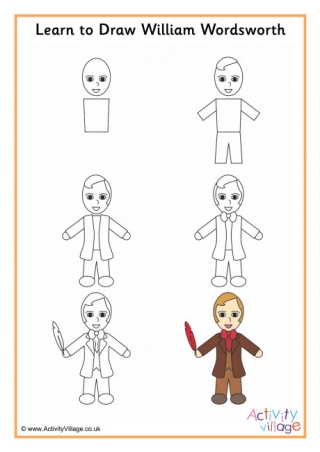 William Wordsworth was one of England's greatest poets. With our step by step guide, the children can learn to draw him, complete with his quill pen. 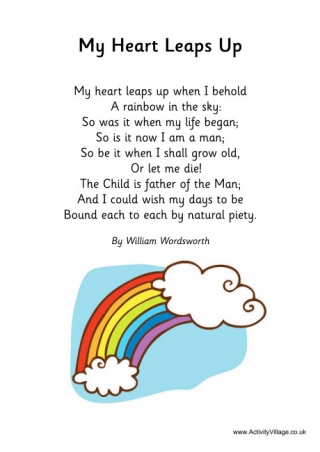 The Heart Leaps Up is a poem by William Wordsworth also known as The Rainbow. With its simple structure and language, it's a great poem to introduce children to Wordsworth's poetry and perfect for classroom displays. 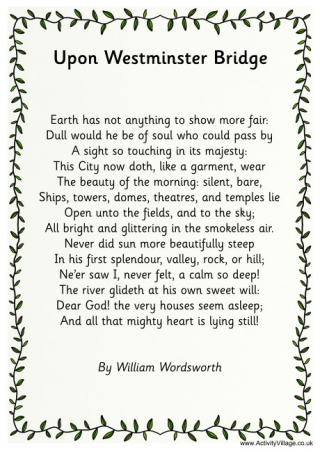 Are you studying William Wordsworth at the moment or learning about poetry? Print one of his famous poems, Upon Westminster Bridge, and use in displays or for class discussions. 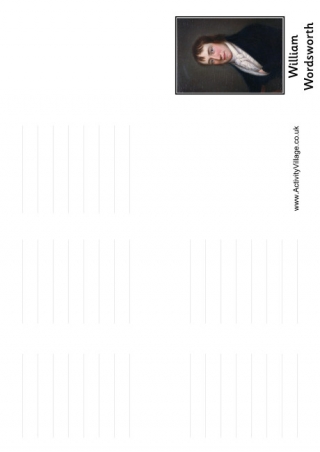 Our William Wordsworth booklet is a great way for the children to record everything they've learnt about this famous poet. We have blank and lined versions available. 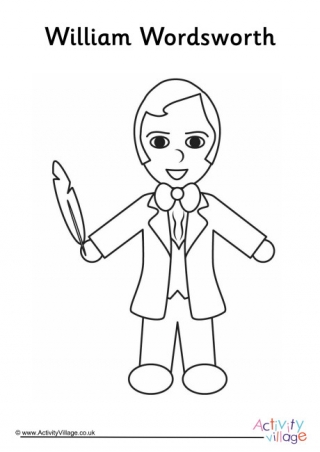 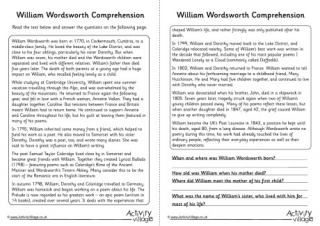 Challenge older children and test their reading and comprehension skills with this comprehension worksheet all about the life and work of William Wordsworth. 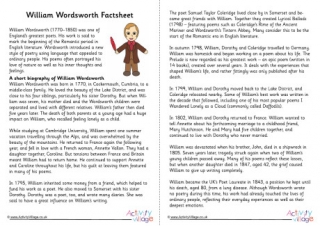 Learn a little about the life of one of England's greatest poets, William Wordsworth, with the help of our easy to read factsheet. 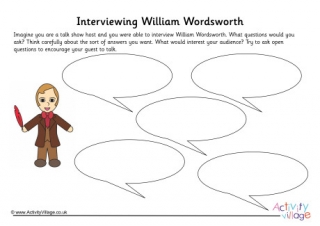 Asking open questions is a great way to gather information from people. This interview worksheet helps practise this useful skill and asks the children to imagine they are a talk show host interviewing William Wordsworth. 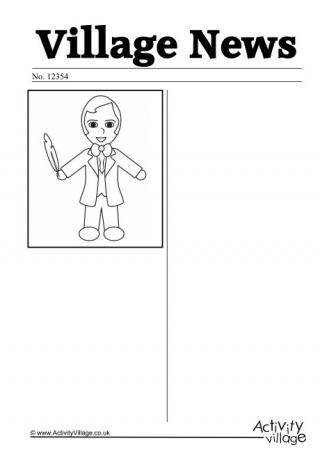 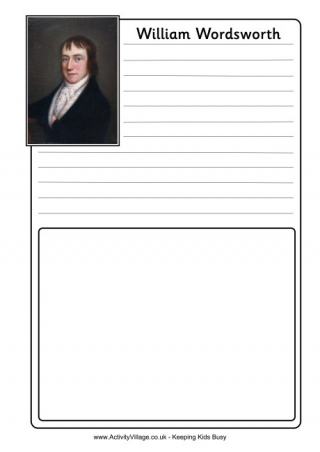 The children can record their work on William Wordsworth on one of our useful notebooking pages. 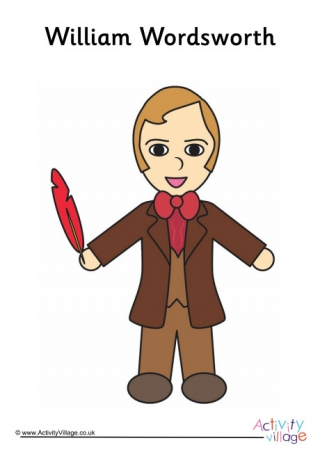 Here's a cartoon-style poster of the famous English romantic poet William Wordsworth, easy to print and perfect for displays and project work. 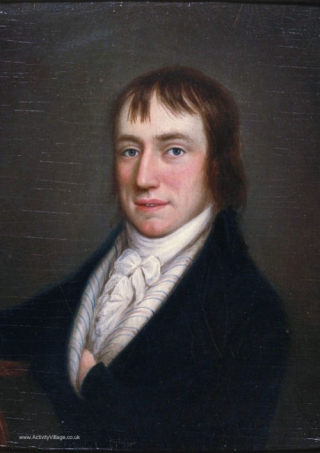 This is a portrait of William Wordsworth done when he was about 28 years old and about to embark on what many believe was his "magnum opus", or greatest work - The Prelude. 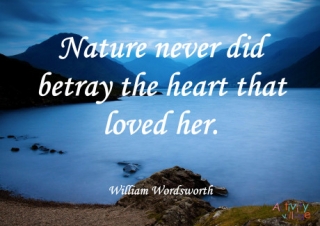 William Wordsworth developed a real love of nature as a young man, reflected in these famous words featured on our scenic quote poster. 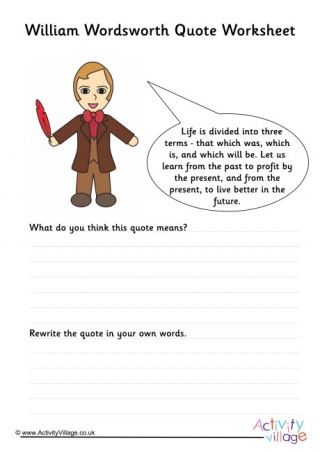 "Life is divided into three terms - that which was, which is, and which will be.

The children could use our William Wordsworth story paper to write a creative story using one of his famous poems for inspiration, or maybe they could try writing their own poetry? 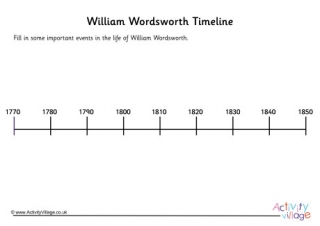 Are you studying the great English poet William Wordsworth at the moment? If so, find out about the important events in his life and then fill them in on this timeline worksheet. 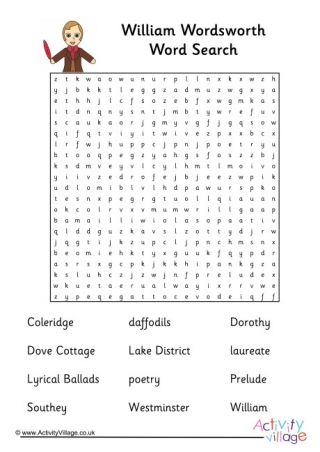 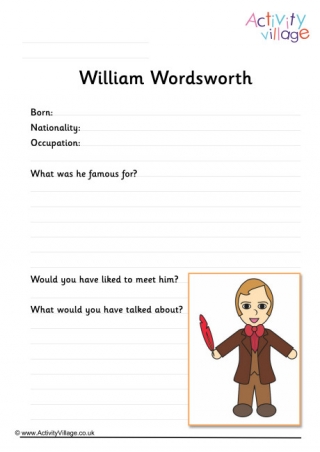 This simple worksheet is aimed at younger children, to help them record what they have learned about William Wordsworth. They can have fun thinking about what they would say to him if they met him! 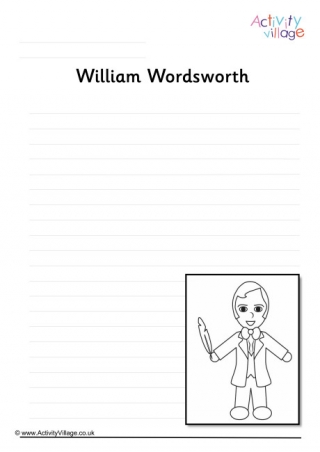 Our writing pages are a fun way to encourage younger children to research and write about famous people. This page is about William Wordsworth, the great English romantic poet. 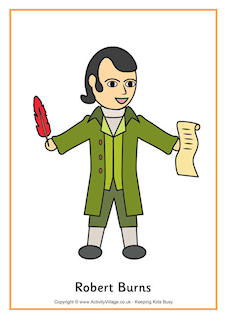