A comprehensive collection of quotes about teachers - something for every occasion, we hope! 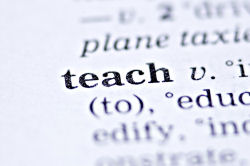 A teacher affects eternity; he can never tell where his influence stops.
Henry Adams

The beginning is the most important part of the work.
Plato

I like a teacher who gives you something to take home to think about besides homework.
Author Unknown

The best teachers teach from the heart, not from the book.
Author Unknown

It's easy to make a buck. It's a lot tougher to make a difference.
Tom Brokaw

What the teacher is, is more important than what he teaches.
Karl Menninger

We often take for granted the very things that most deserve our gratitude.
Cynthia Ozick

There are two good reasons to be a teacher - July, and August!
Author Unknown

The teacher who is indeed wise does not bid you to enter the house of his wisdom but rather leads you to the threshold of your mind.
Khalil Gibran

I am not a teacher, but an awakener.
Robert Frost

Great teachers empathize with kids, respect them, and believe that each one has something special that can be built upon.
Ann Lieberman

It is the supreme art of the teacher to awaken joy in creative expression and knowledge.
Albert Einstein

Everything should be made as simple as possible, but not simpler.
Albert Einstein

A man should never be ashamed to own he has been wrong, which is but saying in other words that he is wiser today than he was yesterday.
Alexander Pope

There are two ways to slide easily through life: to believe everything or to doubt everything. Both ways save us from thinking.
Alfred Korzybski

Education should turn out the pupil with something he knows well and something he can do well.
Alfred North Whitehead

The true teacher defends his pupils against his own personal influences.
Amos Alcott

Awaken peoples curiosity. It is enough to open minds, do not overload them. Put there just a spark.
Anatole France

Sometimes one man with courage is a majority.
Andrew Jackson

You cant direct the wind but you can adjust the sails.
Anonymous

A good education is like a savings account; the more you put into it, the richer you are.
Anonymous

Even the clearest water appears opaque at great depth.
Anonymous

I know but one freedom and that is the freedom  of the mind.
Antoine de Saint Exupery

Let the potential artist in our children come to life that they may surmount industrial monotonies and pressures.
Barbara Morgan

A man should first direct himself in the way he should go. Only then should he instruct others.
Buddha

Where there is an open mind there will always be a frontier.
Charles F. Kettering

By viewing the old we learn the new.
Chinese Proverb

I hear, and I forget.  I see, and I remember.  I do, and I understand.
Chinese Proverb

To think is to differ.
Clarence Darrow

When asked what learning was the most necessary, he said, Not to unlearn what you have learned!
Diogenes Laertius

Whoever neglects learning in his youth, loses the past and is dead to the future.
Euripides

You cannot teach a man anything; you can only help him find it within himself.
Galielo Galilei

To do just the opposite is a form of imitation.
Georg Lichtenberg

To me the sole hope of human salvation lies in teaching.
George Bernard Shaw

Blessed is the man who, having nothing to say, abstains from giving us wordy evidence of the fact.
George Eliot (Mary Ann Evans)

A child educated only at school is an uneducated child.
George Santayana

Creative activity is not a superimposed, extraneous task against which the body, or brain protests, but an orchestration of ... joyful doing.
Gyorgy Kepes

Its what you learn after you know it all that counts.
Harry S. Truman

They know enough who know how to learn.
Henry Adams

Anyone who stops learning is old, whether at twenty or eighty. Anyone who keeps learning stays young.
Henry Ford

I have been maturing as a teacher. New experiences bring new sensitivities and flexibility.
Howard Lester

A talent is formed in stillness, a character in the worlds torrent.
Johann W. Goethe

No matter how good teaching may be, each student must take the responsibility for his own education.
John Carolus S.J.

The origin of thinking is some perplexity, confusion or doubt.
John Dewey

One can think effectively only when one is willing to endure suspense and to undergo the trouble of searching.
John Dewey

Education...is a painful, continual and difficult work to be done in kindness, by watching, by warning: by praise, but above all, by example.
John Ruskin

The job of an educator is to teach students to see the vitality in themselves.
Joseph Campbell

To teach is to learn twice.
Joseph Joubert

Men learn while they teach.
Lucius A. Seneca

The great pilot can sail even when his canvass is rent.
Lucius A. Seneca

What greater or better gift can we offer the republic than to teach and instruct our youth?
Marcus T. Cicero

I am not ashamed to confess that I am ignorant of what I do not know.
Marcus T. Cicero

If I had more time, I would have written a shorter letter.
Marcus T. Cicero

I have gathered a posy of other mens flowers and only the thread  that bonds them is my own.
Michel Montaigne

Trifles make perfection, and perfection is no trifle.
Michelangelo

There is more to life than increasing its speed.
Mohandes Gandhi

Opposites are not contradictory but complementary.
Niels Bohr

An artist is always out of step with the time. He has to be.
Orson Welles

Only the mind cannot be sent into exile.
Ovid

The important thing in life is not the triumph but the struggle.
Pierre de Coubertin

An object in possession seldom contains the same charm that it had in pursuit.
Pliny the Younger

The mind is not a vessel to be filled, but a fire to be ignited.
Plutarch

Every artist was at first an amateur.
Ralph W. Emerson

To arrive at the simple is difficult.
Rashid Elisha

Reinventing the wheel is a process.
Rashid Elisha

The chief cause of human errors is to be found in the prejudices picked up in childhood.
Rene Descartes

Education can be dangerous. It is very difficult to make it not dangerous. In fact, it is almost impossible.
Robert M. Hutchins

Praise, like gold and diamonds, owes its values only to its scarcity.
Samuel Johnson

The young dont know what age is, and the old forget what youth was.
Seumas MacManus

Being entirely honest with oneself is a good exercise.
Sigmund Freud

When inspiration does not come to me, I go half way to meet it.
Sigmund Freud

One must learn by doing the thing; for though you think you know it, you have no certainty, until you try.
Sophocles

It is not often that we use language correctly; usually we use it incorrectly, though we understand each others meaning.
St. Augustine

Wonder is the desire for knowledge.
St. Thomas Aquinas

To define is to destroy, to suggest is to create.
Stephane Mallarme

No one can become really educated without having pursued some study in which he took no interest.
T.S. Eliot

Peoples behaviour makes sense if you think about it in terms of their goals, needs, and motives.
Thomas Mann

The best way to know life is to love many things.
Vincent Van Gogh

Learning is never done without errors and defeat.
Vladimir Lenin

Give me four years to teach the children and the seed I have sown will never be uprooted.
Vladimir Lenin

In the practical use of our intellect, forgetting is as important as remembering.
William James

Come forth into the light of things, let nature be your teacher.
William Wordsworth

God understood our thirst for knowledge, and our need to be led by someone wiser;
He needed a heart of compassion, of encouragement, and patience;
Someone who would accept the challenge regardless of the opposition;
Someone who could see potential and believe in the best in others . . .
So He made Teachers.
Author Unkown

You can observe a lot by just looking around.
Yogi Berra 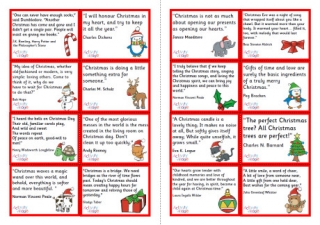 These 24 gorgeous little Christmas lunch box notes feature some of our favourite Christmas quotes and make the perfect little message to tuck into a home-made advent calendar, pop onto a breakfast plate or tuck under a pillow - as well as making a lunch box special, of course! 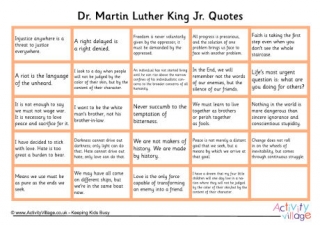 We've compiled 24 of Dr Martin Luther King Jr's most memorable and meaningful quotes on this printable. They were originally intended to be cut out and used with our Hand Banner craft, but of course you might find other uses for them! 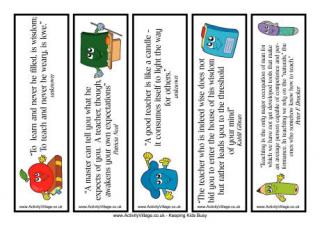 These five bookmarks each have an inspiring quote about teachers and the teaching profession. A fun little gift for your child's favourite teacher, perhaps - or just a nice little bookmark for a teacher to print?