Vichai Srivaddhanaprabha (1957–2018) was a billionaire Thai businessman who also owned the UK’s Leicester City Football Club (known as ‘the Foxes’). He was tragically killed, aged 60, in a helicopter crash after watching a home game in the city. Find out more about this hard-working, passionate and generous man who transformed the fortunes of the Foxes as well as the city of Leicester itself, and whose love of football, its players and its fans, won him great popularity. 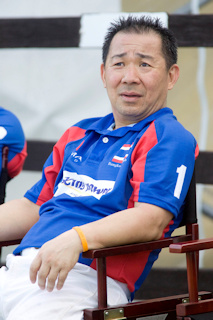 Vichai was a very private man and rarely gave interviews, but these quotes from his son Aiyawatt share some of his beliefs.

“We give our time to the staff, the players and to the manager. We try to manage it like a family, to listen to the problems of every single member of staff.”

“Is it a miracle? It is. It is inspirational and people talk about it. We set the standard of the sport and inspiration for the whole world. It is not just for the sport, it is life. If people use Leicester as the standard now, if they fight, they try – then they can achieve one day.”

"If you do the right thing, something good will come.”

"We love football, we love sport and we know how important the fans are… It is important for the performance. Now they play for the fans, for the support.”

A Short Biography of Vichai Srivaddhanaprabha

Vichai Srivaddhanaprabha was born into a Thai-Chinese family in Bangkok, Thailand, in 1958. His birth name was Vichai Raksriaksorn. Very little is known about his childhood, but he studied in Taiwan and the US.

Vichai’s business empire began from humble beginnings. Aged 31, he set up a store in Bangkok selling Thai handicrafts. He was interested in the duty-free goods he had seen on his travels (goods sold cheaply at airports because they are exempt from local taxes). Vichai was given a licence to run Thailand’s first duty-free store in Bangkok and in 1995, started a duty-free store at the city’s airport too. He named his company ‘King Power’ in honour of the Thai monarch.

In the years that followed, Thailand’s tourist industry boomed and new airports sprung up across the country. Vichai controlled all duty-free stores and became wealthy very quickly. By 2007, he was worth an estimated $200 million; a decade later, ten times as much; and on his death, an estimated $3.3 billion.

Vichai’s attention turned to English football when his company sponsored the shirts of Leicester City in 2007. He had watched the team at Wembley a decade earlier – his first experience of English football. In 2010, he bought the club for £39 million, paid off the club’s debts (£103 million) and later made himself chairman and his youngest son Aiyawatt vice-chairman. He also bought the club’s Walkers stadium, renaming it ‘King Power Stadium’.

Vichai saw several football managers come and go but by 2014, Leicester City had been promoted to England’s top football competition, the Premier League, after a ten-year absence. Vichai promised fans he would ensure the club finished in the top five, within three years, spending up to £180 million towards it. Many people laughed at this proposition, but within two years (and just a third of the money spent), the team were hailed Premier League champions. Bookmakers had given them odds of 5,000–1 to win, and the sporting world was stunned. Vichai celebrated by giving the squad new BMW cars (in the team’s blue colours), as well as a night out in London and £1,000 each to spend in a casino.

Vichai’s widespread generosity extended to the club’s fans, to the city of Leicester itself and to various charitable causes in both the UK and Thailand. He donated £2 million towards a new children’s hospital in Leicester, £1 million to Leicester University’s medical department, £1 million to community causes in the city, and even £100,000 to support the reburial of King Richard III, whose remains had been found beneath a city car park. On his birthday, he gave free Thai beer, hot dogs and doughnuts to fans, as well as 60 season tickets on his 60th birthday. He also made sure fans could support their team by keeping ticket prices low and subsidising coach travel to away games. Just weeks before his death, planning permission was granted for a new £100 million training complex which Vichai hoped would take the Foxes to even greater heights.

Vichai had two sons and two daughters with his wife Aimon, who were all involved in the family business. With homes in London and Berkshire, he would regularly travel to Leicester by helicopter to watch the club’s home games. Aside from business and football, he loved racehorses and polo. He started his own polo team, the King Power Foxes, in 2014, and played among members of the British Royal family; he also owned the VR Polo Club in Bangkok. In May 2017, he bought a second football club, OH Leuven in Belgium.

In 2012, Vichai’s family were honoured with a new surname by the then king of Thailand, King Bhumibol Adulyadej. ‘Srivaddhanaprabha’ (meaning ‘light of progressive glory’) was given in recognition of Vichai’s widespread charity work and for raising the profile of Thailand overseas.

Vichai died with two members of his staff, as well as the helicopter pilot and his partner, just moments after leaving the stadium. In the days that followed, fans left a sea of flowers and football scarves and signed a book of condolence. The local community adored Vichai for so generously giving both his time and money to the football club and the city. Players who knew him affectionately as ‘the Boss’ talked of his humour, ever-present smile, guidance and wisdom. He died tragically young but left behind an inspirational story and a remarkable legacy. 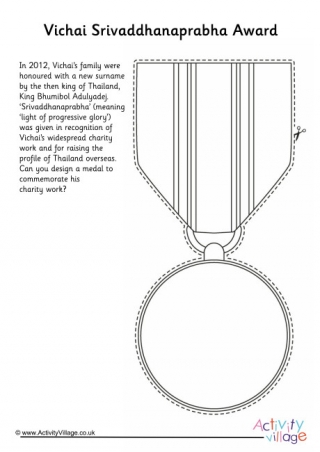 Vichai Srivaddhanaprabha endeared himself to the people of Leicester by donating £2million to a local hospitals charity. Can the children design a medal to recognise his charity work? 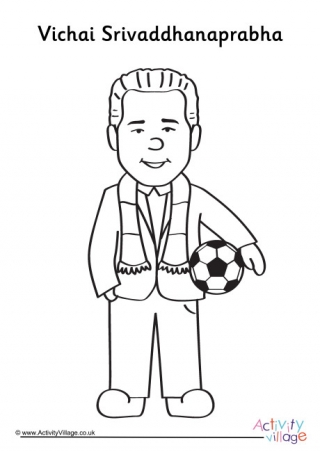 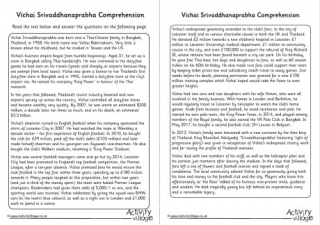 Read all about the life of Vichai Srivaddhanaprabha, then answer a few questions at the end. An interesting way to practise comprehension skills... 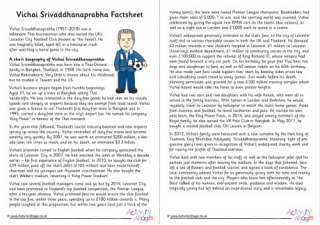 Read our fascinating biography of Vichai Srivaddhanaprabha,  including how he helped transform Leicester City from a struggling football team to Premier League champions in 2016. 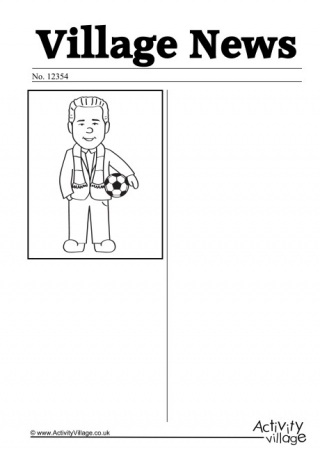 Newspapers have been full of tributes to Leicester City Football Club owner Vichai Srivaddhanaprabha after he sadly died in a helicopter crash outside the King Power Stadium. 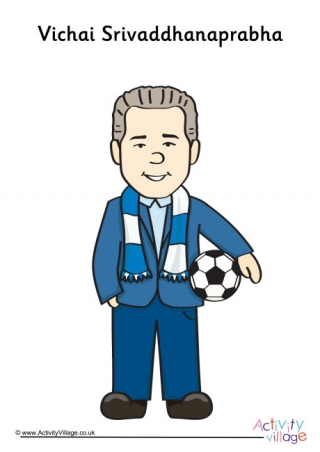 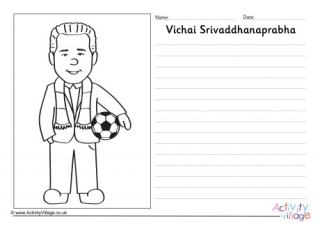 Use our story paper to write about Vichai Srivaddhanaprabha  - and of course, the children can colour in his picture too. Two versions available to download below: lined, or with handwriting lines. 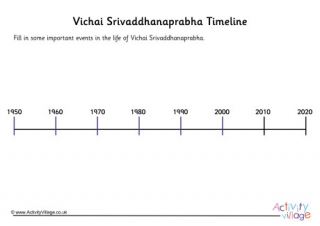 One of the high points of Vichai Srivaddhanaprabha's life was when his beloved football club Leicester City became Premier League champions. Can the children mark this date and other important events in his life on this printable timeline? 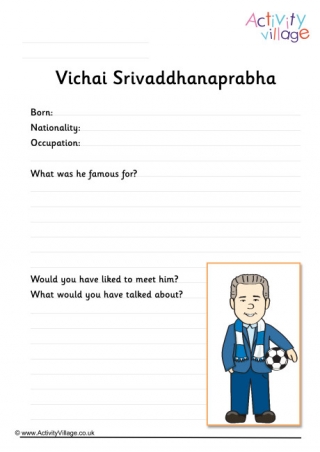 Introduce younger children to famous people using our simple worksheets. This worksheet is all about the generous and popular owner of Leicester City Football Club, Vichai Srivaddhanaprabha. 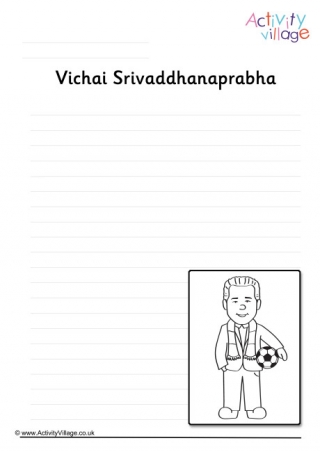 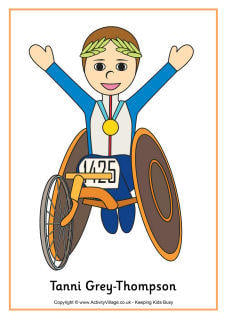