One of the most used section of the Activity Village website for our family has to be the Word Search pages. We have been using them for years and have printed and reprinted a few favourites time and time again. But what I did not realise the first time I printed out a few word searches was how much the kids were going to learn from them. At the time I was honestly just looking for something to use with my oldest as a way of encouraging her to look for letter patterns.  I never imagined that my youngest would want to join in, but he did. At this stage he did not even know what all the letters were but he was adamant that if his sister had a page he also needed one. 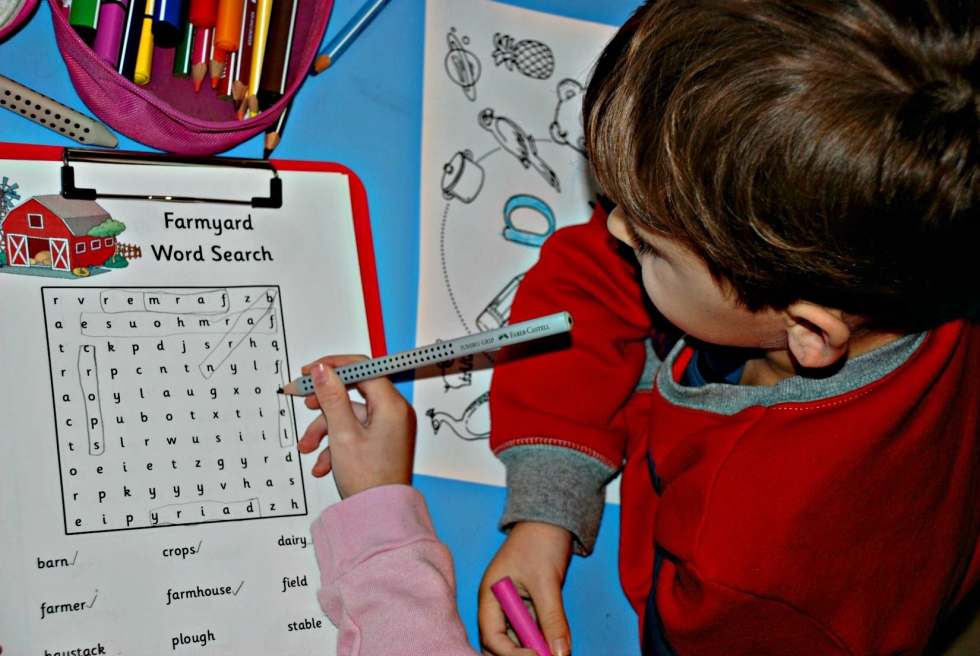 I dug out some old photos and you can see he was still learning his letters (in this case letter p, with one of Activity Village's I Spy Alphabet colouring pages) but kept wanting to join in the Farmyard Word Search with his sister!

I found some simpler word searches for him and it became an excellent letter recognition activity. He started with the Farm Animal Noises Word Search. He would search for letters together so, although he could not read the word "woof", he would look for “wo” together and then see if there was another o and f after it. He was so determined to complete the page and he got very excited when he found the words. This is a photo of him doing his very first word search.

We used the word searches with the shorter words first but once he had the hang of looking for letter patterns he would happily search for longer words.

I found with my youngest that the farm animal themed word searches were a great starting point and then we went onto general animal word searches. Only after a bit of practice did we move on to the themed ones like autumn or transport. It helps to offer a word search based around a topic that the kids are interested in, so with my son the transport one are a massive hit. 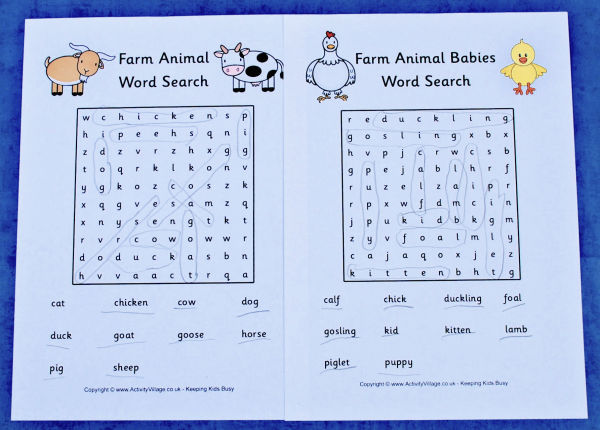 In addition to helping my youngest with his letter recognition, the word searches definately helped with letter formation (after finding a word he would sometimes try and rewrite the word on the side of his word search) and word recognition. Learning his letters and sounds was fun. And we have also noticed that doing word search has helped our oldest with her spelling. I have heard her state a few times that she knows how to spell a certain word because it was in a word search.

But we have not just stuck with word searches, although they are still in high demand in our house. We have also tried our hand at Word Scrambles. They are slightly harder for the kids and again the Farm Animal Word Scramble is probably the best one to start with. It contains a number of smaller 3 letter words and most kids are very familiar with farm animals. 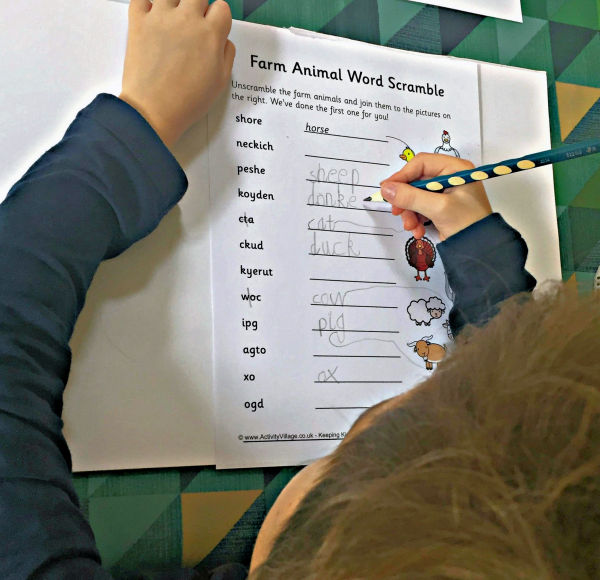 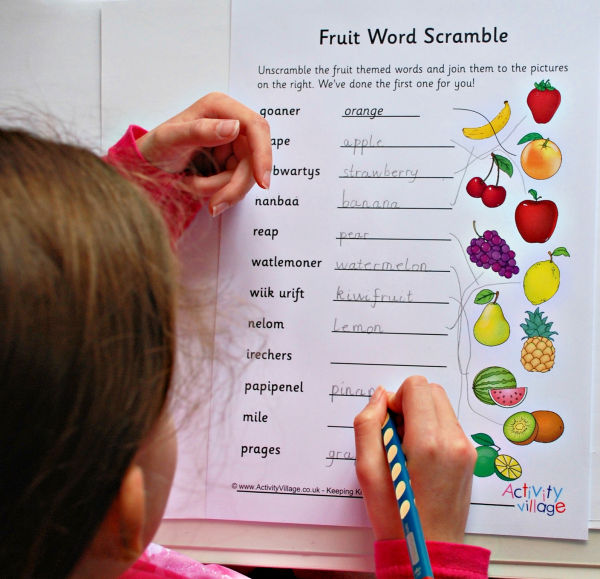 and a Fruit Word Scramble

And then we have crosswords, which are my oldest's current craze!  These are proving to be a great way for her to work on spelling words in a fun manner. And although my youngest is still only spelling basic words he has started joining in with the help of his big sister. He guesses the correct word, then he tells us how he thinks he should spell it – often only really getting the starting sound(s) and ending sounds. His sister then helps him fill in the middle sounds. I was actually reluctant to do crosswords with him as I thought it would end up just being frustrating but with the help of his sister it has turned into a great activity for sounding out words and working on which letters make which sounds. And it has been a relaxed way to introduce a few spelling rules like when to use a k or a ck. 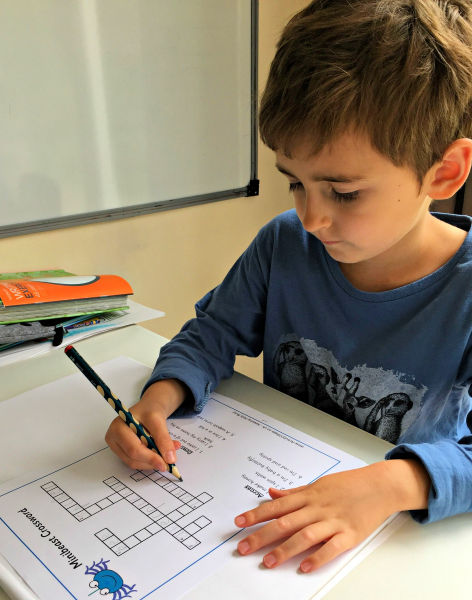 Working on a minibeasts crossword 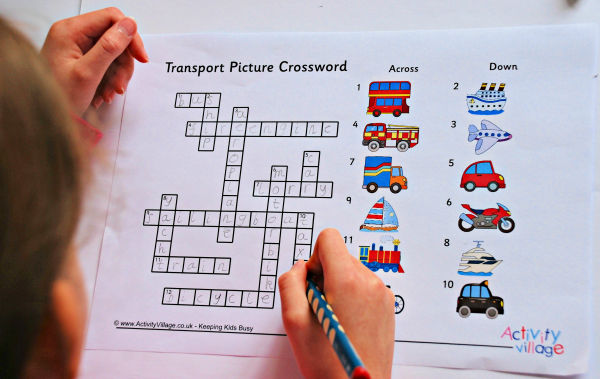 and a transport picture crossword. 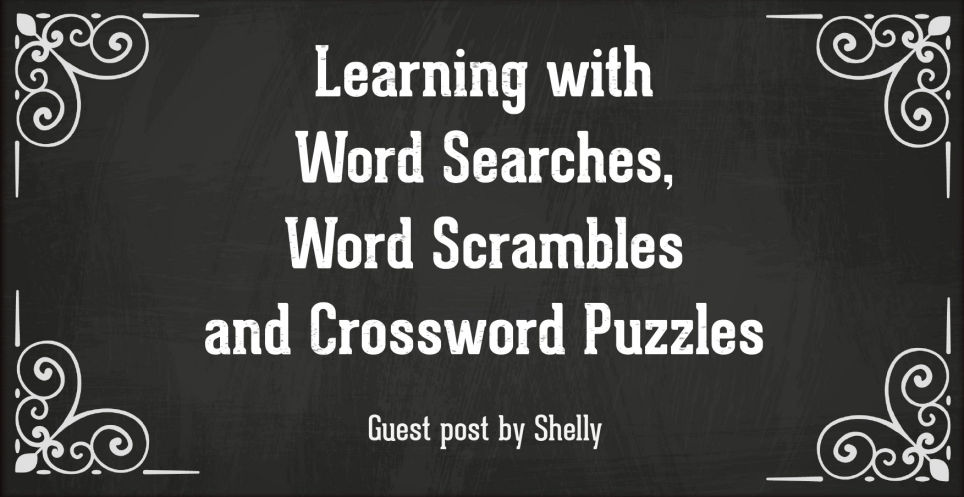