Penguins tend to be popular birds with children because of the way they waddle! We've made sure we've got lots of penguin activities at Activity Village because they are an interesting bird to study, and are often these days associated with winter themes and Christmas.

25th April is World Penguin Day! What a good day to find out about penguins and enjoy some of our fun resources!

Penguins are flightless, aquatic birds living almost exclusively in the southern hemisphere. Over millions of years, a penguin's wings have evolved to work as flippers to help them swim.

The largest penguin is the Emperor Penguin, pictured in our photo, weighing up to 90 pounds, whilst the smallest penguin, the Fairy Penguin, weighs only 2 pounds!

There are 18 different species of penguin found in varying climates, ranging from Galápagos penguins on tropical islands at the equator to Emperor penguins living at the icy waters of Antarctica. The Emperor penguin lives in the coldest habitat of all penguins, with some Antarctic zones reaching a temperature as cold as -40º or -60º C. Regardless of their habitat, all penguins keep a body temperature of between 38º and  39ºC.

Some species of penguins spend of several months of the year in the ocean and only use icebergs as places to rest and mate.

Emperor penguins and King penguins only lay one egg, and all other penguin species lay two eggs. With the exception of Emperor penguins, partners take turns incubating eggs. Female Emperor penguins transfer a single egg to the top of her mate's feet then goes to sea to feed while the male incubates the egg. 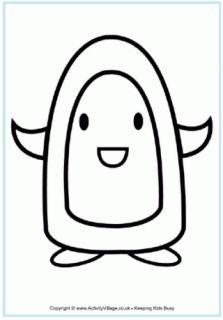 Penguin Crafts
Penguins are cute, and penguins are popular with kids - and so are these penguin crafts! We've... 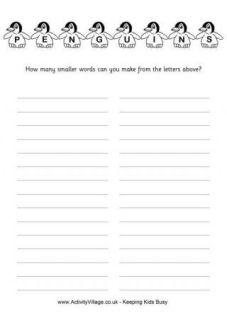 Penguin Printables
We've got all sorts of penguin printables at Activity Village - great for winter themes,... 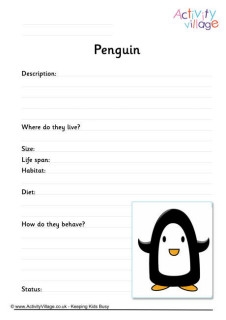 Penguin Worksheets
Who doesn't love penguins? Bring a bit of fun to your classroom or home learning with our...