Samuel Pepys (1633–1703) is most famous for the diary he kept for almost a decade while living in 17th century London. Samuel had a successful career with the Royal Navy and the British government, but is best remembered for his frank and honest diary entries of everyday London life. Find out more about the man behind these recollections (which he had tried to keep private!) and then use our collection of printable resources below to test your knowledge.

During the Great Fire of London in 1666, Samuel was worried his own house would be burnt down. But we know from his diary, he was also anxious about his wine and an expensive Italian Parmesan cheese! Samuel dug a hole in the garden and buried these items to keep them safe! 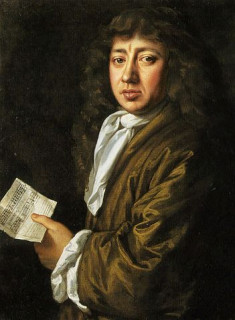 “As happy a man as any in the world, for the whole world seems to smile upon me!”

A Short Biography of Samuel Pepys

Samuel Pepys was born in 1633 in London. He was the fifth of eleven children, but many of his siblings died in infancy. Samuel’s family were poor but they had rich relatives. Over time, Samuel combined help from his relatives with a lot of hard work to become a respectable middle-class man.

On leaving school, Samuel went to Cambridge University. When he graduated, he worked for a relative, Edward Montagu – a landowner who became an admiral and a politician. Through Montagu’s success, Samuel got a job as a clerk in the Royal Navy. He was organised and efficient and good at this administrative role.

At 22, Samuel married 14-year-old Elisabeth de St. Michel, whose family were French refugees. For a time they lived in Westminster by the River Thames. It was here that Samuel began writing his diary, aged 26, on 1 January 1660. Perhaps it was a New Year’s resolution! He wrote in a type of shorthand, and sometimes in a foreign language, to keep his thoughts private.

Samuel was good at describing the lives of ordinary people, as well as his own. We learn that he liked to drink alcohol and enjoyed the company of women. He visited the theatre and loved music. He was also delighted with a new watch that had an alarm! But Samuel also wrote about important events of the time, such as the Plague (1665) and the Great Fire of London (1666). He also mentions the coronation of King Charles II, and the life of his famous friends, Sir Christopher Wren and Sir Isaac Newton.

Elisabeth died in 1669, when she was just 29, from typhoid fever. Although Samuel was unfaithful to his wife, he had great affection for her and commissioned a monument in her honour. Samuel stopped writing his diary that year. He was having trouble with his eyesight and thought writing in poor light would make him blind.

In later life, Samuel was elected as a member of parliament, and rose up the ranks of administrative duty in the Royal Navy. But his success brought enemies, too. In 1679, Samuel was accused of plotting against Charles II and selling secrets to the French. For a time, he was sent to the Tower of London, although the charges were later dropped.

Samuel was actually a loyal worker under Charles II and his brother James II. But when James fled abroad in 1688, Samuel found no favour with the new monarchs, William and his wife Mary, and promptly resigned.

In his last years, Samuel moved to Clapham where he lived until his death, aged 70. He left his estate to his nephew John Jackson. When Jackson died in 1723, Samuel’s large collection of books, including his diaries, went to Cambridge University where they remain to this day. Samuel’s diary wasn’t published until 1825. More than a million words long, it was never intended for others to read, but has given us a fascinating firsthand account of an extraordinary period in English history. 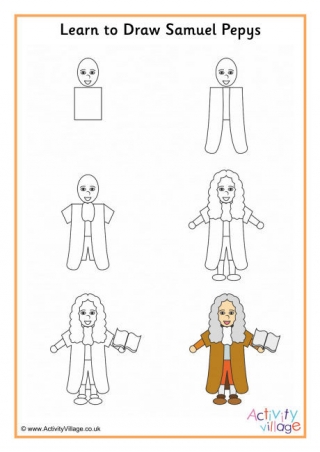 Here's something for young artists to try. Can they draw Samuel Pepys holding his diary, by following our helpful step-by-step guide? 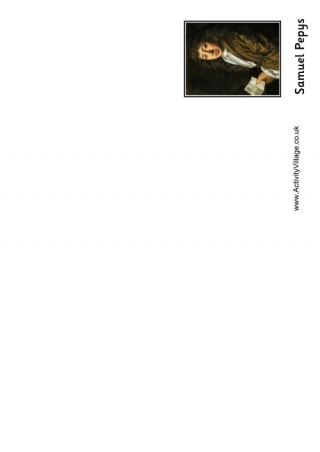 Here's a different way to store all the information you have learned about Samuel Pepys. 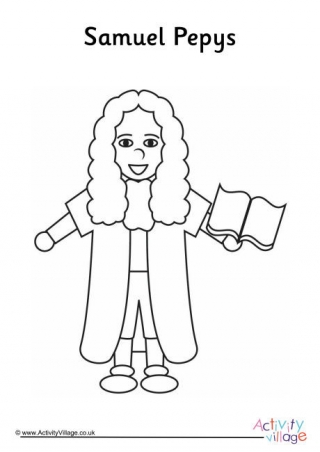 Samuel Pepys is most famous for writing his diary, which he is holding on our colouring page! 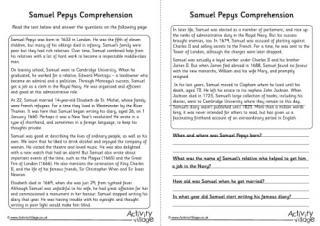 Test the older kids on their comprehension skills by asking them to read all about the life of Samuel Pepys. Once they've read the text, there are some questions to answer on what they've read. 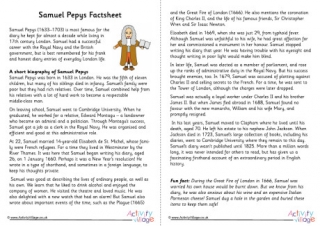 Find out some facts about the life of Samuel Pepys with the help of our handy factsheet. 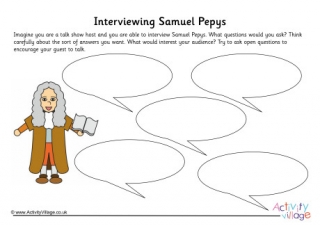 Samuel Pepys wrote about lots of events in his diary, including the Great Fire of London. Imagine you are a talk show host and have the chance to interview him. What could you ask him and what would the audience want to know? 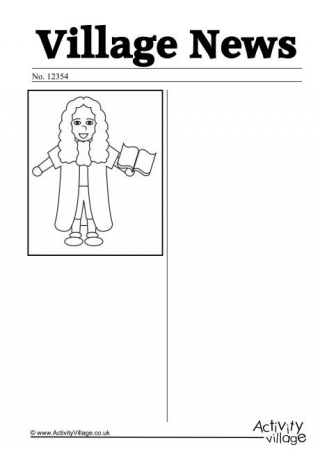 Sum up everything you've learned about Samuel Pepys with this newspaper writing activity  - a fun and alternative way to record information! 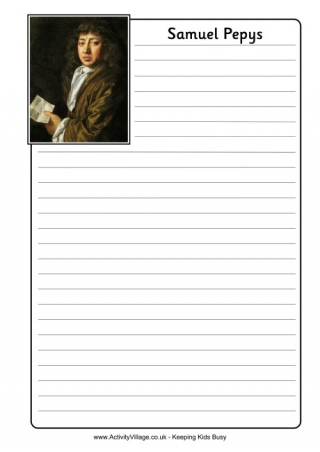 We have two variations of this Samuel Pepys notebooking page, one with just lines and one with space for a picture too. Perhaps the kids might draw the Great Fire of London? 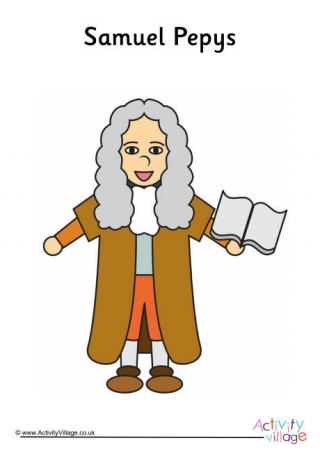 Samuel Pepys is famous for writing a diary which tells us lots about what life was like 350 years ago. Here's a poster of him holding his famous diary ready to print and display. 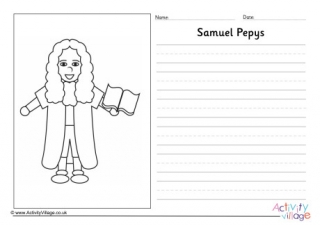 Use our fun story paper for writing what you have learned about Samuel Pepys. We have lined or handwriting versions - and of course there's a colouring picture, too! 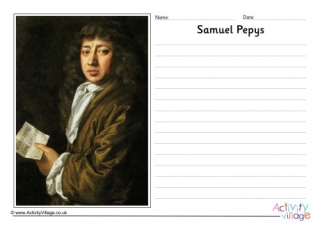 This story paper features a portrait of Samuel Pepys and is ideal for older kids to record what they've learnt about him, or to inspire an original story. 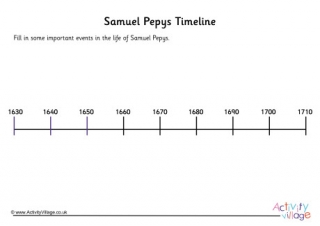 Can the children use our Samuel Pepys timeline to fill in the important events in his life? 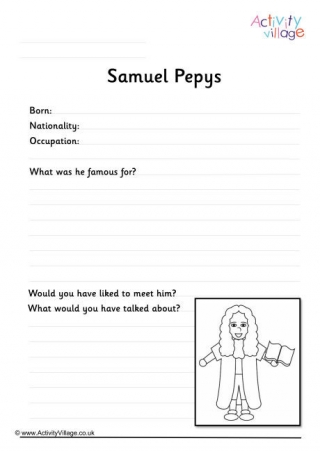 Find out some simple facts about Samuel Pepys, and use this little worksheet to record them. 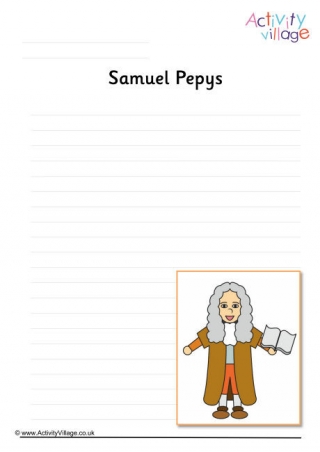 Use our writing page to write down what you've learned about Samuel Pepys - choose our colour version, or black and white if you'd like to colour in the picture too. 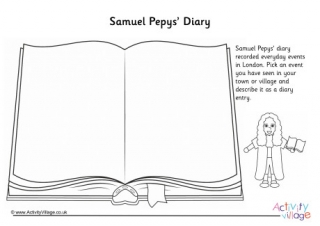 Here's an interesting writing exercise for the kids. Samuel Pepys wrote about everyday events in London in his diary. Can the children write a diary entry for an event that they've seen in their own town or village?