Jane Austen (1775 to 1818) is one of the most widely read and loved authors of all time. Her novels tell stories about the gentry and upper classes in the England of her time, and are full of humour and drama, wonderful characters, love and happy endings. Perhaps the best known novel is Pride and Prejudice, with the heroine Elizabeth and her hero, Darcy. Other novels include Emma, and Sense and Sensibility. You can read more about her and explore our collection of colouring pages, worksheets and other printable activities below.

Fun facts: Despite the romantic happy endings in her novels, Jane never married but lived a very simple life with her parents and her beloved sister Cassandra, sharing a small bedroom and writing each day on a tiny table in the dining room of their cottage. Although her books were popular while she lived, very few people knew that she was an author and her books were all published anonymously. As she wrote, she watched out of the window so that if any of her neighbours came visiting, she could hide her writing away.

"If things are going untowardly one month, they are sure to mend the next."
Jane Austen

A Short Biography of Jane Austen

Jane Austen was born in Steventon. Hampshire in 1775 to parents George, a clergyman, and Cassandra. She was one of eight children. Throughout her life Jane remained very close to her only sister, Cassandra.

When Jane was about 11 she developed a love of writing. She later collected her early works together in 3 notebooks which she called Juvenilia.

Jane’s father retired in 1800 and the family moved to Bath, then a fashionable Georgian spa town. In 1805 Jane’s father died and Jane, along with her sister and mother found themselves in very poor financial circumstances. First they moved to cheaper accommodation in Bath, then spent a number of years moving about, staying with family and friends.

In 1809, Jane’s brother Edward offered his mother and sisters a cottage on his estate at Chawton in Hampshire. It was at Chawton that Jane, with the help of her brother Henry, found a publisher.  Her first book to be published was Sense and Sensibility in 1811, which she had written years before under the title Elinor and Marianne. A reworking of a book originally called First Impressions was published in 1813 as Pride and Prejudice. These were followed by Mansfield Park (1814) and Emma (1815).  Jane published her books anonymously under the simple title ‘a Lady’.

By 1816 Jane’s health was declining and she moved to Winchester for treatment. There she died in 1817 aged only 42, and was buried in Winchester Cathedral.
After Jane’s death, two further books were published: Northanger Abbey and Persuasion. 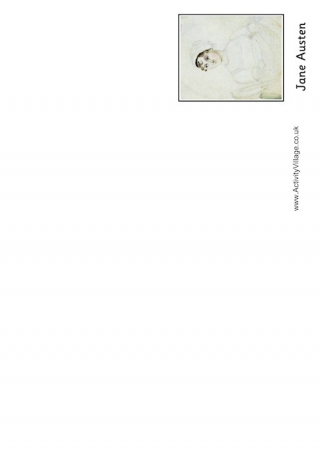 Write your own minibook about the author Jane Austen, perfect for a lapbooking project or building up your own mini library. Instructions on how to fold our Jane Austen booklet can be found here. 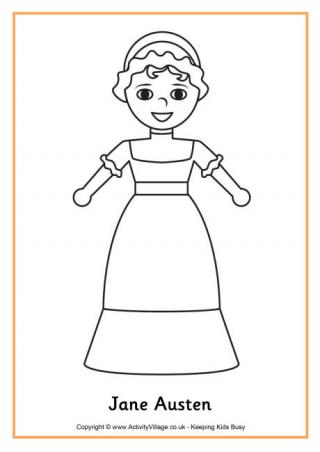 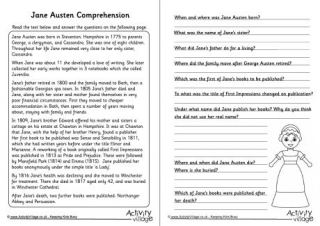 Learn more about Jane Austen and practise the important skills of reading and understanding with this Jane Austen comprehension activity. 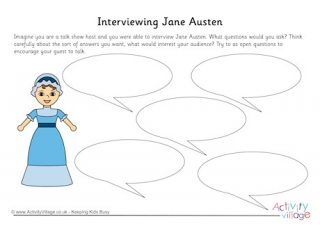 Children need to think about the differences between open and closed questions, and what sort of questions will encourage people to talk, in order to complete this Jane Austen interview worksheet. 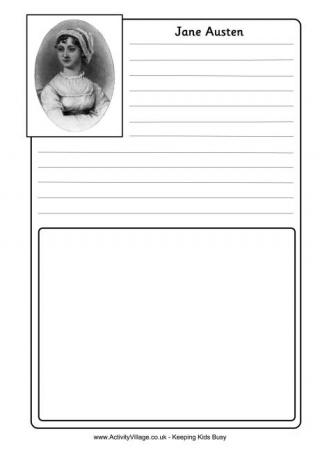 Here we've got two Jane Austen notebooking pages for older children, the first with space for an illustration (pictured below) and the second with lines throughout. 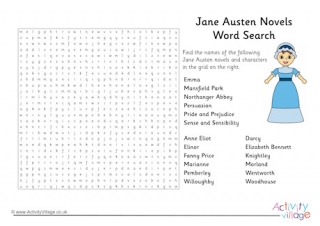 Featuring the 6 main novels of Jane Austen and some of their characters this Jane Austen novels word search is a challenge. 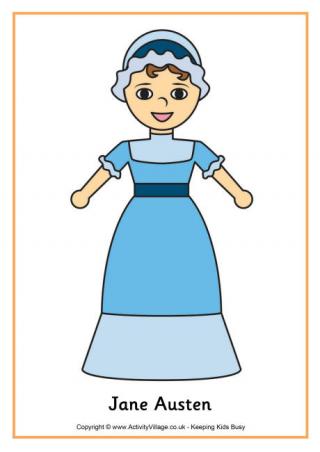 A simple illustrated poster of Jane Austen for younger children. It makes a nice front page for a project! 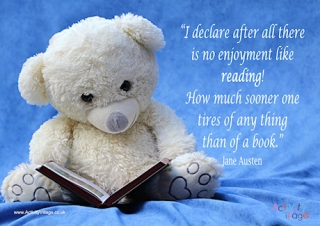 The joy of reading is encapsulated in the Jane Austen quote and set off with a cute teddy bear. 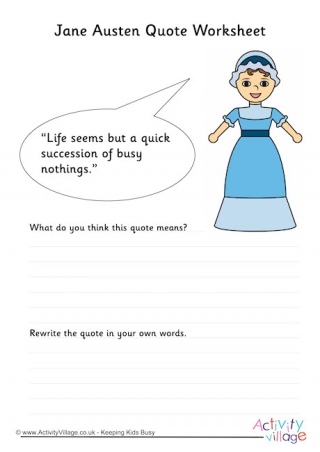 "Life seems but a quick succession of busy nothings", children need to think about what the author might have meant by this on our Jane Austen quote worksheet 1. 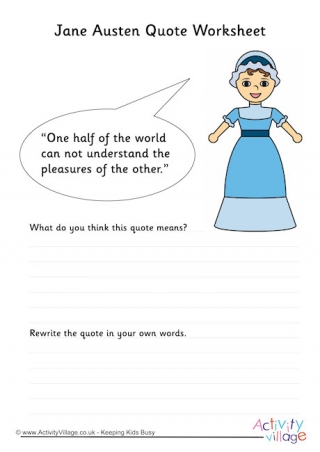 Jane Austen is famed for her social observations of Georgian Britain. The second of our Jane Austen quote worksheets features one of these observations. 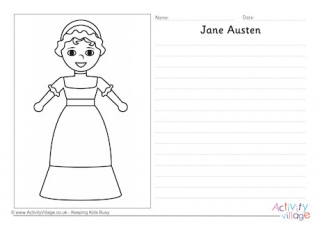 Our Jane Austen story paper is perfect for younger children who might be doing a bit of research about Jane Austen for a Georgian project. The pages come in lined or handwriting, each with a simple colouring picture. 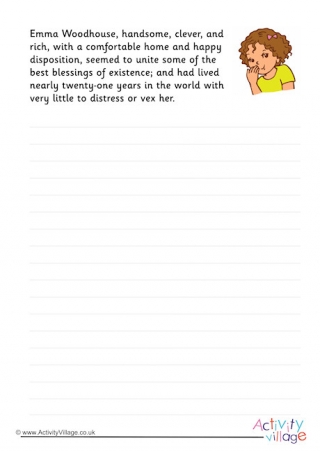 Imagine your own tale for Jane Austen's spirited heroine Emma Woodhaouse on the first of our Jane Austen story starters. 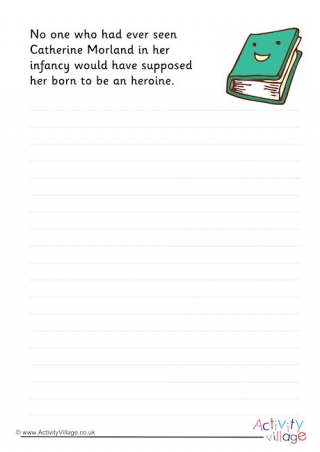 The opening line of Jane Austen's gothic style novel, Northanger Abbey, is the inspiration on this Jane Austen story starter. There is no need to read the book before trying a bit of creativity. 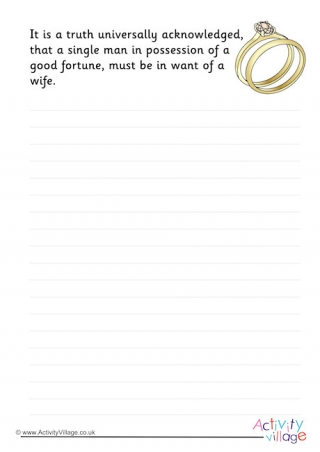 This is perhaps one of the most famous opening lines of a novel of all time. Our Pride and Prejudice, Jane Austen story starter lets you make up the ending of this famous book. 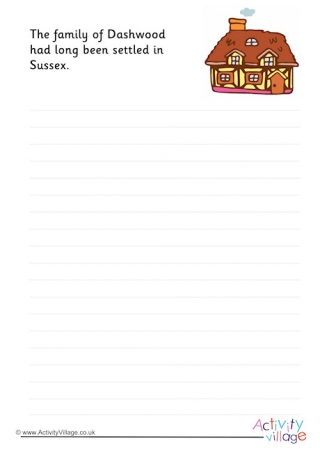 The opening line of Sense and Sensibility is so open it could take you anywhere. Have fun imagining your own story for the Dashwood family on our Jane Austen story starter. 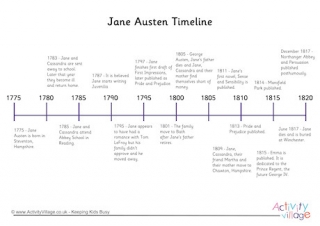 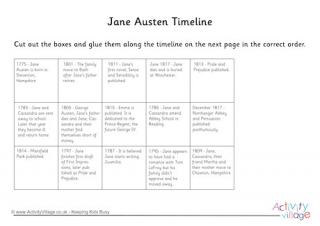 There are 15 important events from the life of Jane Austen that children need to cut out and arrange in to the correct order and then glue on to the timeline on page 2 of this Jane Austen timeline worksheet. 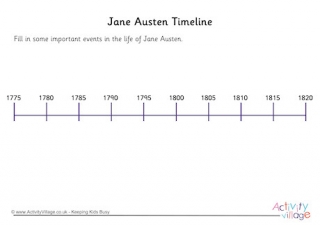 Our Jane Austen timeline worksheet is perfect for an author study project. You could use one colour of pen to record details of the author's life and another colour to add important national and global events from this time period. 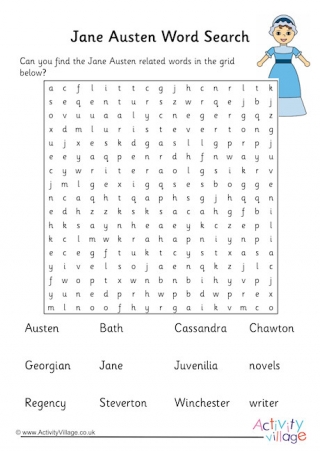 Find the names, places and words associated with the Regency author Jane Austen to complete this wordsearch puzzle. 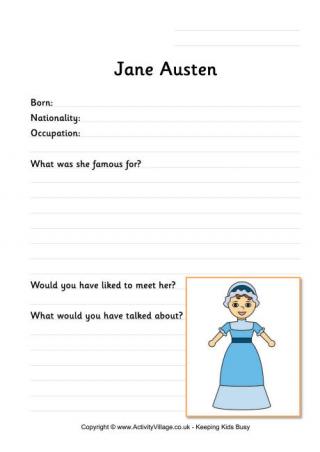 Encourage children to find out a little about Jane Austen by researching the answers to the first few questions. They can then think about what they've learned by answering the final questions. I would love to talk to Jane about the inspiration for her wonderful characters... 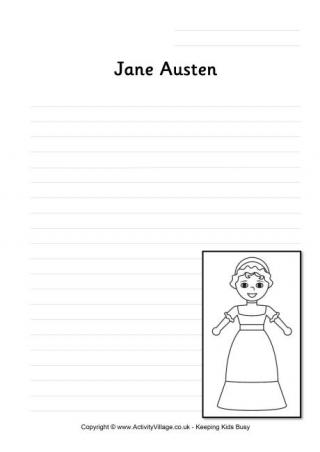 The kids can use our printable to write about Jane Austen's life and books - or perhaps to write a letter to her... Choose from two versions, black and white or coloured. 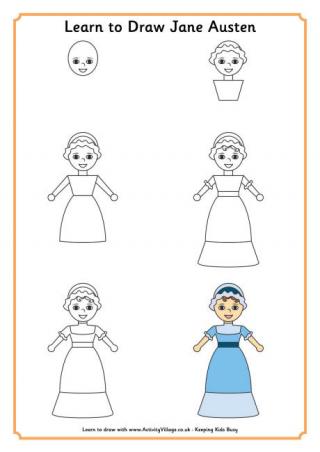 Just for fun, kids can learn to draw their own portrait of Jane Austen, dressed in the appropriate clothes for her period. Just follow along with our step by step tutorial. 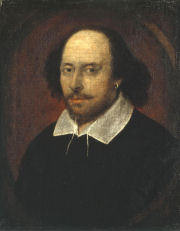