We've started this section with a simple set of worksheets comparing numbers up to 10, using consecutive numbers and introducing language such as "more" and "fewer" and "one more". More coming soon. 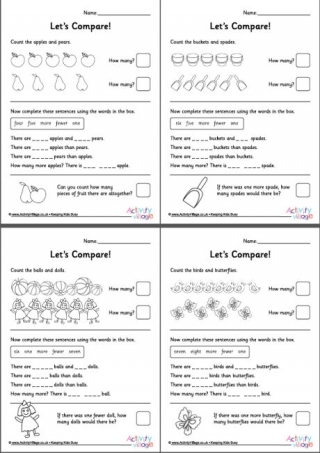 This worksheet pack contains 8 worksheets that work on comparing numbers up to 10, starting with the most simple 2 and 3. They ask children to count and write the number of objects and then introduce the concepts of more, less and one more by asking children to complete the sentences. 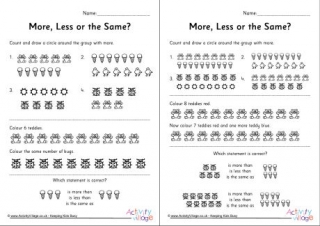 There are two worksheets in this set, introducing simple "count and compare" activities and also the most simple language of comparison - more, less or the same. They are available in both UK and US school fonts. 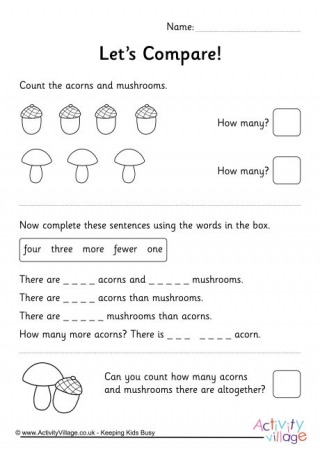 This simple worksheet asks children to count and compare numbers 3 and 4, and introduces simple comparison language as well as a challenge at the end. 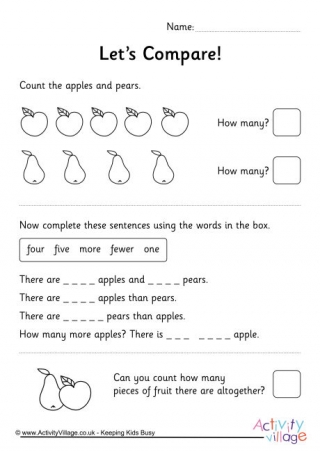 In this worksheet we ask children to count the apples and pears and compare which number is greater, then complete the sentences. Good early practice at comparing numbers ... 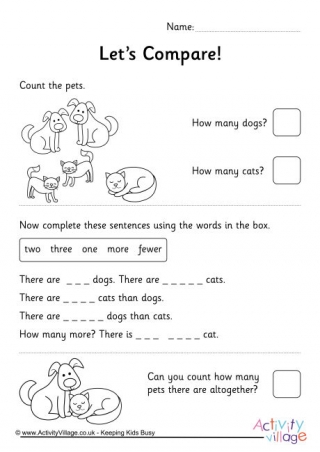 Children can count and then compare the numbrer of dogs and cats in this introductory comparing numbers worksheet, and finish the sentences with some comparison words. 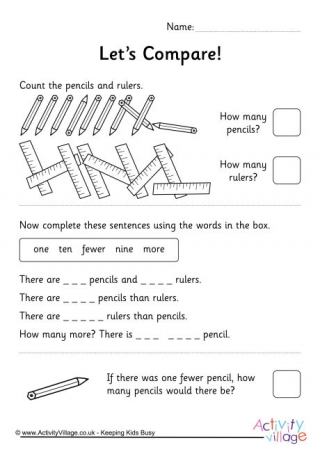 Here is the final one of our comparing numbers worksheets, this one using the numbers 9 and 10. Children count, decide which is greater, and fill in the sentences using simple comparison words. 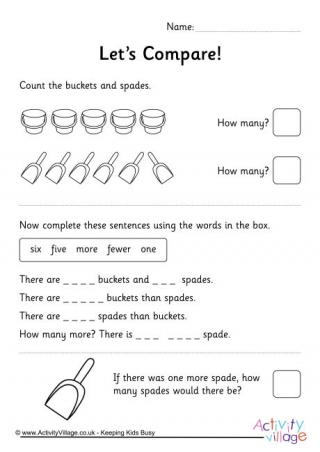 Kids can have fun counting and comparing the number of buckets and spades on this simple comparing numbers worksheet, which also asks them to fill in some sentences with comparison words. 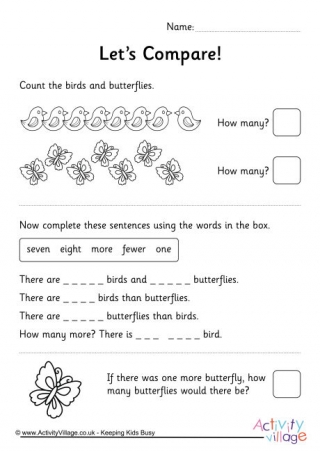 Birds and butterflies in abundance! Count and compare with this cute worksheet. 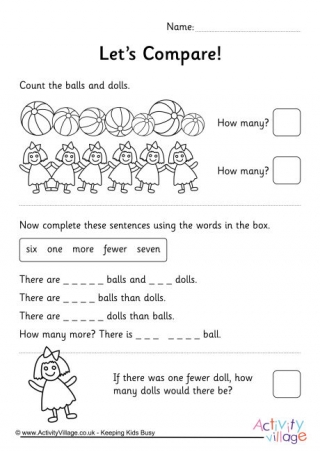 Kids can count the balls and dolls and compare the numbers, then fill in the sentences using simple comparison language and try the final challenge! There is some fun winter counting involved in this comparing numbers worksheets, which also asks kids to fill in the simple sentences using comparison words taken from a word bank. This fun worksheet asks children to count the minibeasts and fill in the number, then compare with another group and use comparison words "more" and "fewer" in the sentences below. Count the shapes and fill in the blanks in the sentences below, comparing each group with its neighbour. Children could "loop" the shapes together in 5s and 10s to make the counting easier. Here is more practise in comparing numbers to 10 - counting arrays of different shapes and comparing each with their neighbouring array. We ask the kids to fill in the blanks in the comparison sentences beneath. The little wildlife pictures on this worksheet make the counting and comparing fun! We provide groups of rabbits, squirrels, sparrows and owls for the kids to count and compare, and ask them to fill in the blanks with comparison words. There are four worksheets in this set. The first features wildlife, the second and third shapes, and the fourth minibeasts. The first three arrange the objects to be counted in regular arrays while the fourth presents the minibeasts in a more random arrangement, making it a little harder. This second set of worksheets for comparing numbers to 20 is full of fun pictures to get the kids engaged. Count 6 different groups of robots, flowers, Halloween and Christmas pictures, and compare the numbers in each pair of groups. Count the Christmas decorations, Christmas trees and Christmas presents - all numbers from 11 to 20 - and compare, filling in the blanks. Children need to count the flowers in each group, fill in the blank with the correct number, and then compare the pairs. Each group has between 11 and 20 flowers. You can ask them to guess before they count, too. Count up the broomsticks, pumpkins and ghosts in each group and then compare the groups together, filling in the blanks as you go. Halloween worksheet fun! Count each group of funny robots and then compare each group with each other, filling in the blanks as you go. Robots make worksheets fun! Can the kids fill in the blanks in this table, by writing one less and one more than the numbers in the middle? Make maths fun with this adorable monster worksheet which helps children to practice "one more" and "one less". Introduce the most simple of subtraction by taking one away from numbers 1 to 10. This set of 3 worksheets works through some word problems and then introduces a few "sums" for the children to try, all with the help of a number line if necessary.