Boudicca (c. 30 AD – c. 61 AD), also known as Boadicea, was a Celtic queen who showed great strength and courage leading a rebellion against Roman rule in Britain. Find out how this brave and determined red-haired woman took the Romans by surprise and stood up for herself, her family and the British people. Then use our collection of printable resources below to test your knowledge.

Fun fact: Boudicca’s story was almost completely forgotten when she died, but her tale was revived by two British queens. Elizabeth I was often compared to the Celtic queen who battled foreign powers, and later Queen Victoria likened herself to the brave and stubborn warrior woman – the name Boudicca is said to mean ‘Victory’ or ‘Victoria’. A bronze statue of Boudicca and her daughters riding a war chariot can now be found close to the Houses of Parliament in London. Victoria’s husband, Albert, commissioned it – and if you look closely, you will see that Boudicca’s face looks quite like a young Queen Victoria.

“I am not fighting for my kingdom and wealth now. I am fighting as an ordinary person for my lost freedom, my bruised body, and my outraged daughters… Then you will win this battle, or perish. That is what I, a woman, plan to do! – let the men live in slavery if they will.”
Boudicca 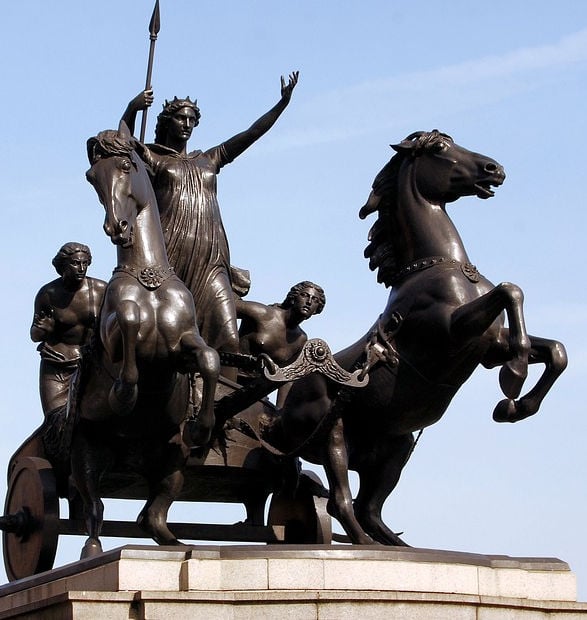 A Short Biography of Boudicca

Boudicca was born in Britain around 30 AD. She became a Celtic queen when she married King Prasutagus, the ruler of the Iceni tribe. They lived in what is now Norfolk, England, and had two daughters.

When the Romans invaded Britain in 43 AD, they took over parts of southern England, but they made pacts with local tribes. It was agreed, for example, that King Prasutagus could continue ruling the Iceni people - although power ultimately lay with Rome.

When Prasutagus died around 60 AD, however, things changed dramatically. Boudicca should have inherited her husband’s wealth and taken over as queen. Prasutagus had even tried to secure this by voluntarily leaving half of his property to the Roman Emperor, Nero. But the Romans lived by different rules. Roman women had few rights and were expected to obey their men. Despite their agreement with Prasutagus, the Romans confiscated Boudicca’s land, as well as that of other leading tribesmen. When Boudicca protested, she was beaten in public and her daughters were attacked, too.

The Iceni tribe were infuriated and their resentment of Roman rule grew. Boudicca, in particular, refused to be bullied. When the Roman governor, Paullinus, was called away in 60 AD to lead a Roman army in Wales, she called on her tribe to start a fierce rebellion. Other tribes joined the fight, and soon Boudicca had raised the biggest army Britain had ever seen!

First, the rebels set their sights on Colchester (the first capital of Roman Britain), where they defeated a Roman legion and burned the city to the ground. On hearing the news, Paullinus rushed back from Wales and arranged for London to be evacuated. He guessed correctly that London was the rebels’ next target.

Boudicca and her army went on to destroy London and St Albans, too. It is said that more than 70,000 people were killed in these three cities alone. Only those on horseback managed to escape.

The Roman army regrouped and began to fight back. Although they were small in size, they had superior weapons and a wealth of training. The Celts had long, unwieldy swords and wore no body armour, while the Romans were well protected and had short, lethal knives. Boudicca’s army was around 20 times bigger, but they were eventually defeated in the Battle of Watling Street in 61 AD. The battle is thought to have been in the Midlands, near Watling Street, a great Roman road.

To avoid the humiliation of capture, Boudicca fled the battlefield and poisoned herself. But she died a heroine in the eyes of the British people. The Romans had been shocked by the size and scale of the rebellion and she had shown how women could be brave leaders of men. Although the Romans were victorious, they had learnt their lesson. In the years that followed, they were more careful and respectful in the way they ruled. Their fate at the hands of Boudicca has also remained an inspiration to other strong women through the ages. 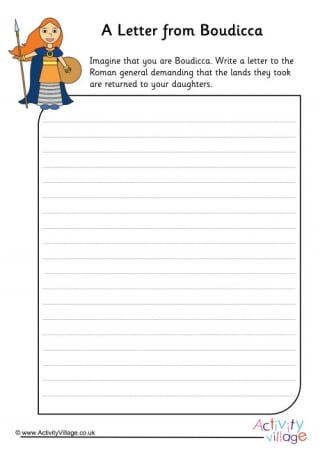 Imagine you are Boudicca and write a letter to the Roman general demanding the lands they took are returned to your daughters. A great worksheet to help practise persuasive writing and learn a little history too! 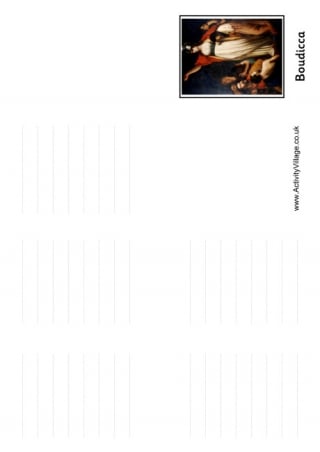 Write your own minibook about Boudicca, perfect for a history project or building up your own mini library. Instructions on how to fold the booklet can be found here. 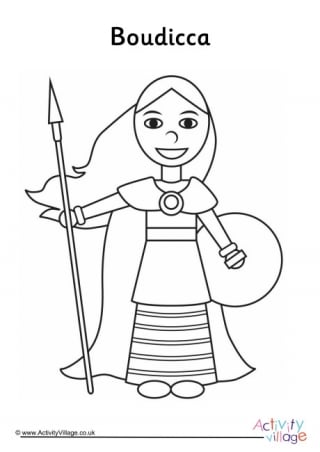 Have fun colouring in this picture of Celtic Queen Boudicca. She was famous for her fiery red hair, so get a nice bright crayon ready! 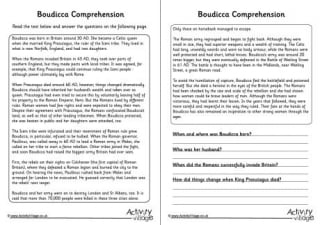 Older kids can do a little comprehension practise and learn some historical facts about Boudicca too with our comprehension worksheet. Ask them to read the text first, then answer the questions. 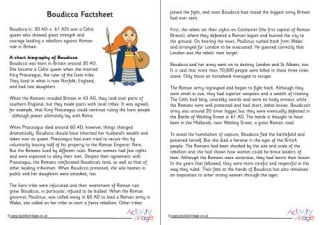 Learn a few facts about the Celtic Queen Boudicca with our handy factsheet. 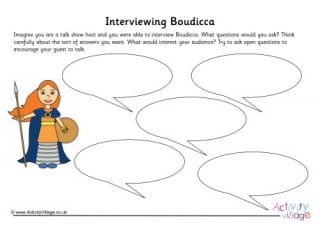 I think many of us would love to go back in time and ask famous people questions about their lives! This worksheet asks the kids to imagine they are interviewing Boudicca - what would be some good questions to ask her, and what would the audience like to hear? 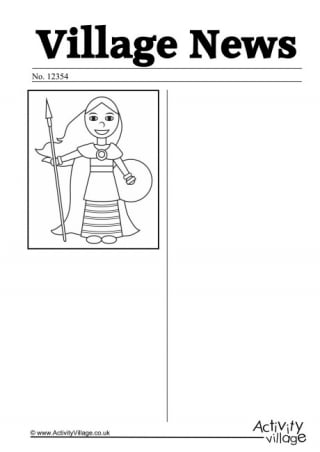 Can the kids use this Boudicca newspaper writing prompt to write about Boudicca's eventful life, or maybe to report on her rebellion against the Romans? 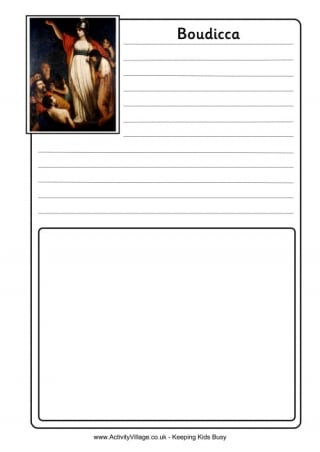 We have two Boudicca notebooking pages for older children, the first with space for an illustration and the second with lines throughout. 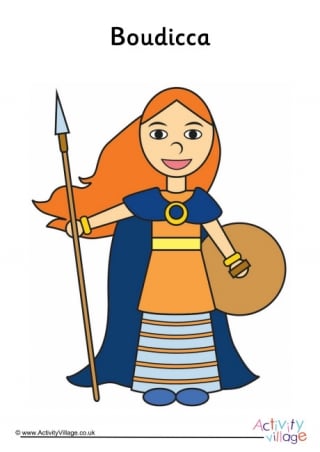 Here's a fun cartoon-style poster of Boudicca, holding a spear and shield and with her famous flame-red hair! 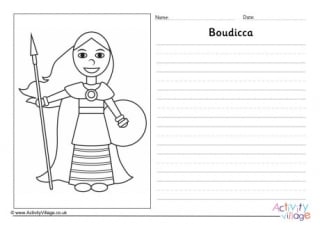 Our Boudicca story paper is perfect for younger children who might be doing a little research about the Celtic Queen. The pages come in lined or handwriting, each with a simple colouring picture. 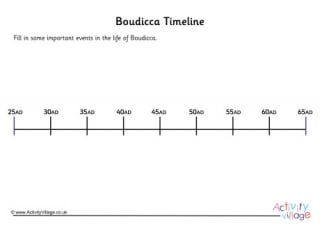 Print out this blank timeline worksheet then get the kids to fill in the important events in Boudicca's life. 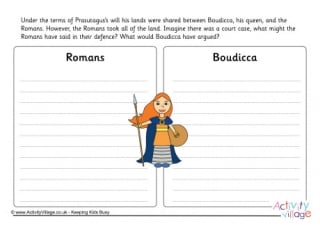 When Boudicca's husband died, she was supposed to keep half of his land, but the Romans took it all! This worksheet asks the children to see both sides of the argument and write a case for each. 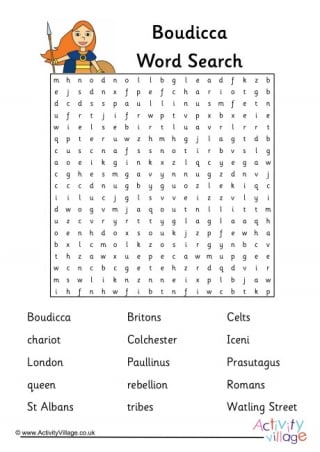 There are 15 words all about Celtic Queen Boudicca hidden in our word search grid, so it's quite a challenge! We've included the answers to help if you're stuck... 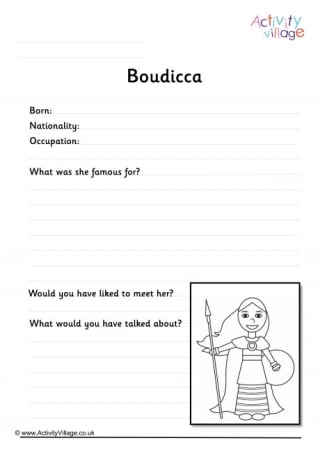 This simple worksheet all about Boudicca is aimed at younger children. Can they answer a few simple facts, then talk about if they'd like to have met her and what they would have talked about? Choose from colour or black and white. 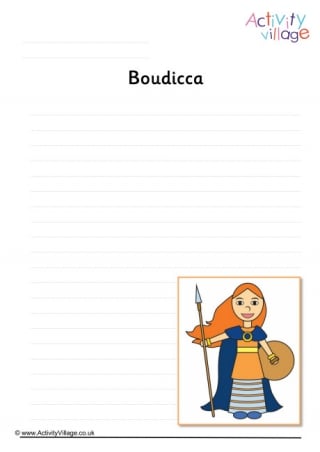 Our writing pages are a fun way to start younger children researching and writing about famous people. This writing page is about Boudicca, the Celtic Queen who led a rebellion against the Romans in Britain. 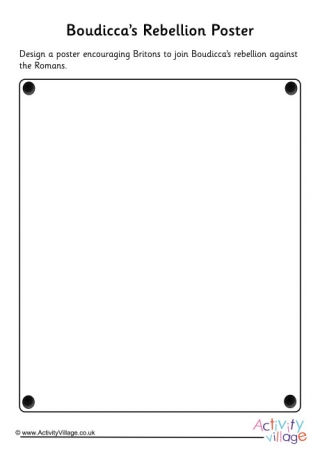 Boudicca led a famous rebellion against the Roman occupation of Britain. This poster asks the kids to design a poster encouraging Britons to join her in this rebellion. It should be as eye-catching and persuasive as possible! 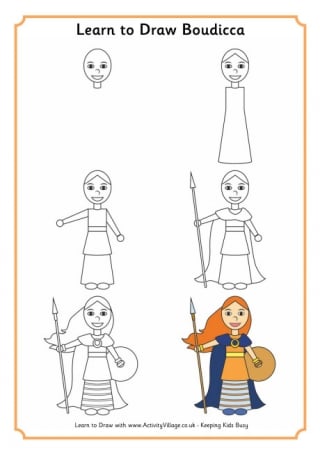 Our step by step by guide makes learning to draw the famous Celtic Queen Boudicca a lot more easy! Once you've finished you can colour in the picture too... 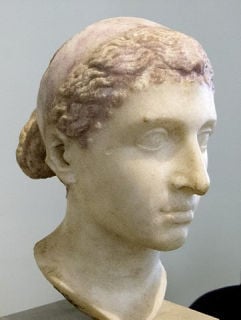