Lots NEW! Frederick Douglass (c.1818–1895) was an African American who escaped from slavery as a young man and dedicated the rest of his life to campaigning for equal rights for all. Some have called him the most influential African American of the 19th Century. Find out more about this brave and intelligent man, who courageously stood up for what was right and successfully influenced those in positions of power, below. Our printable resources below will help you explore further. 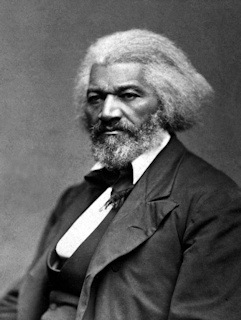 “It is easier to build strong children than to repair broken men.”

“Knowledge is the pathway from slavery to freedom.”

“The soul that is within me no man can degrade.”

A Short Biography of Frederick Douglass

Frederick Douglass was born to an African American slave on a plantation in Talbot County, Maryland, in around 1818. His mother Harriet died when he was just ten. He never knew his father.

Frederick was mostly raised by his grandmother Betty, but as a slave himself, he had to work from the age of seven. He was assigned to Captain Anthony at the Wye House plantation. Then when his master died, Anthony’s son-in-law Thomas Auld sent Frederick to serve his own brother’s family in Baltimore.

Hugh Auld’s wife, Sophia, taught Frederick the alphabet when he was about 12. But Hugh forbid Sophia from teaching Frederick any more (it was illegal to teach slaves to read at the time). Frederick was keen to learn, however, and secretly taught himself to read and write by watching those around him. He began to read newspapers and formed his own views of right and wrong. For a time, he was hired to another plantation, and taught the slaves there to read, too. But local plantation owners soon put a stop to that.

In 1833, Thomas Auld sent Frederick to work for farmer Edward Covey as a punishment. Covey whipped Frederick and gave him very little food. He tried to break Frederick’s spirit, but it only made him more determined to fight for freedom. Frederick tried escaping slavery twice, and finally succeeded with the help of Anna Murray. Anna was a free black woman living in Baltimore, who gave Frederick money and identity papers. Aged 20, he disguised himself as a sailor and pretended to be a free black seaman. After boarding a train north, he arrived in New York as a free man, but there was always the fear that he would be sent back to the south and made a slave again. Frederick and Anna had fallen in love and they soon married and moved to New Bedford, Massachusetts. They took the name Douglass and had five children together. They would be married 44 years.

In Massachusetts, Frederick met many free African Americans as well as abolitionists (people who were against slavery). He was invited to speak at meetings about his experiences as a slave. Although he was nervous, he turned out to be an excellent speaker and the abolitionists (who were mostly white and had no firsthand experience of slavery) encouraged him because he was such a good example of their cause.

In 1845, Frederick wrote an autobiography about his experiences ‘Narrative of the Life of Frederick Douglass’. It became a bestseller and many people couldn’t believe it was written by a slave with no formal education. He later wrote more tales of his life ‘My Bondage and My Freedom’ (1855) and ‘Life and Times of Frederick Douglass’ (1881).

To avoid being captured by his former slave owners, Frederick travelled to Ireland and Britain for a couple of years, where he gave lectures in churches and chapels about his experiences. He received a great deal of support – in fact, enough funds were raised to buy his freedom from Thomas Auld.

Frederick returned to the US in 1847 as a free man for once and for all. He began publishing an anti-slavery newspaper, the ‘North Star’. Frederick also supported women’s suffrage (the right to vote). Before long, he was one of the most famous black men in America. During the Civil War (1861–1865), Frederick fought for the rights of black soldiers. He pleaded with President Lincoln for their equal pay and treatment, and to save captured soldiers from slavery. After the war, Frederick was appointed to positions of government, and served as an ambassador to Haiti. He also worked with President Andrew Johnson on the right of black people to vote.

Frederick continued to travel and lecture in later life. After his wife’s death in 1882, he married Helen Pitts, a white abolitionist and supporter of women’s suffrage. Frederick died from a heart attack aged 77, shortly after a meeting for women’s rights. He was buried next to Anna in the Douglass family plot, and Helen would join them eight years later. Today Cedar Hill in Washington, D.C., the house he spent his last 17 years, has been preserved as the Frederick Douglass National Historic Site. It is a fitting testament to a remarkable man who helped to change the lives of so many. 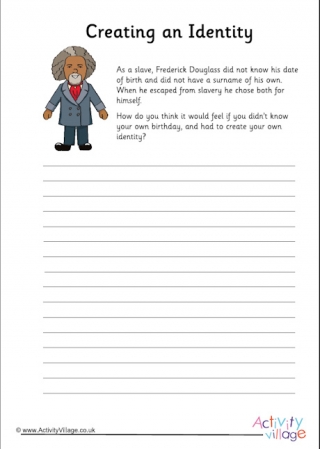 It's hard to imagine what it was like for slaves such as Frederick Douglass who didn't even have a surname or know their date of birth. Can the children write about how they would feel if they didn't know about their identity? 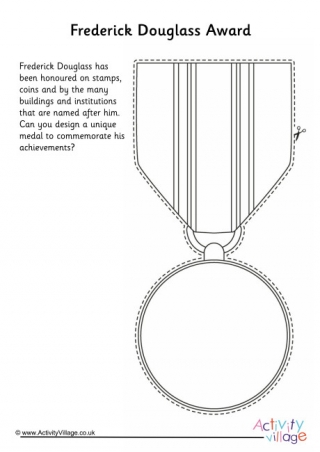 Frederick Douglass is thought by many to be the most important African American male abolitionist. Can the children design an award to commemorate his achievements? 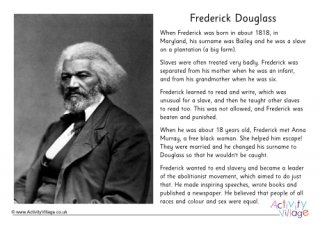 Here is a printable short biography of Frederick Douglass in simplied language, written specially for younger children. It's a great place to start when learning about this inspiring gentleman. We have a writing page to match. 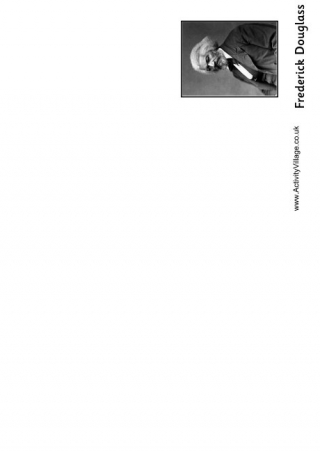 Record everything you learn about Frederick Douglass in this foldable booklet featuring his portrait. You'll need our origami booklet folding instructions found here. 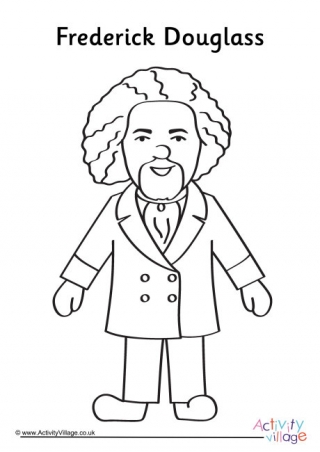 Younger kids can start learning about Frederick Douglass by colouring in this simple cartoon picture. 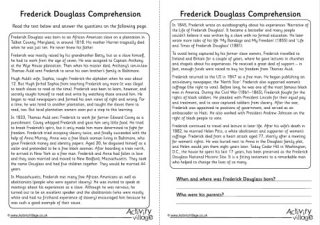 The aim of this comprehension worksheet is to read the text about Frederick Douglass, then try to answer the questions at the end. Learn a little about Frederick Douglass by reading our two-page printable full of useful facts! Can the kids imagine they are interviewing Frederick Douglass for a TV show, and write their questions in the speech bubbles on this worksheet? 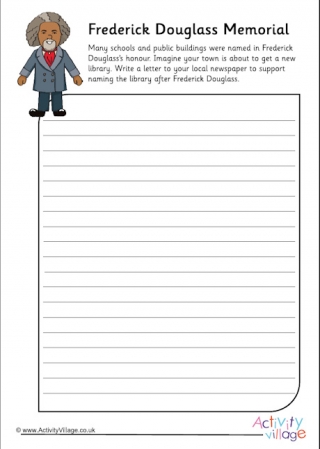 Frederick Douglass has had many schools and other buildings named in his honour. Can the children write a letter to their local newspaper saying why a new library in their town should be named after him too? 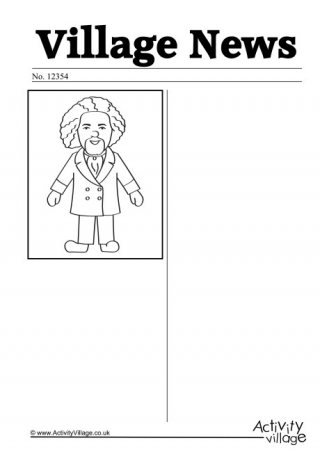 Our newspaper writing prompts are an interesting way to write down what you've learned about famous people and events. This one is for American social reformer, Frederick Douglass. Use our notebooking pages to record everything you have learned about Frederick Douglass (choose from two different pages below). Print this poster of Frederick Douglass to use in displays or lapbooks. 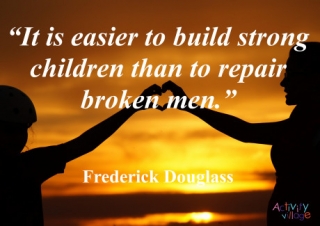 "It is easier to build strong children than to repair broken men". Print this inspirational quote by Frederick Douglass to use in your displays. 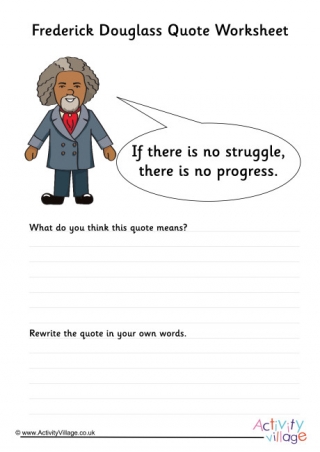 "If there is no struggle, there is no progress." This worksheet features a quote from Frederick Douglass - can the children think about what it means and rewrite it in their own words? 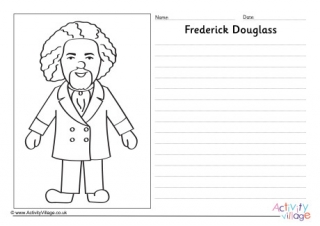 Use our simple story paper for all your writing projects about Frederick Douglass. Choose from lined or handwriting lines versions below. This Frederick Douglass story paper features a photograph portrait of this famous abolitionist and is perfect for older kids writing about his life and achievements. Add the important events in the life of Frederick Douglass onto this printable timeline. Can the kids find all 15 words hidden on our Frederick Douglass word search grid? We've included the solution in case they need to refer to it. This simple worksheet is an easy way to introduce the life and achievements of Frederick Douglass to younger children. Can they do a little fact-finding and fill in the questions? Write about the remarkable achievements of Frederick Douglass on our useful writing page (available in colour, or black and white).