Rosa Parks (1913–2005) was an African American civil rights activist, most famous for her peaceful protest on a Montgomery bus in 1955. Her actions helped to spark a civil rights movement across America. Find out more about this ‘mother of freedom’ whose strength and courage changed the lives of African Americans and paved the way for a more equal world. Then enjoy using our printable resources below to investigate further.

Rosa Parks Day is celebrated in various American states either on 4th February, her birthday, or 1st December, the day she was arrested. 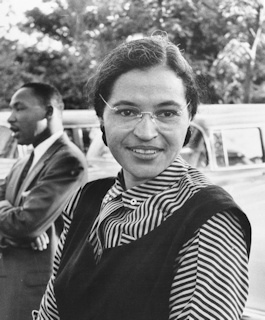 “All I was doing was trying to get home from work.”

“You must never be fearful about what you are doing when it’s right.”

“I believe we are here on the planet Earth to live, grow up and do what we can to make this world a better place for all people to enjoy freedom.”

A Short Biography of Rosa Parks

Rosa Parks was born Rosa Louise McCauley in Tuskegee, Alabama, USA, in 1913. Her father James was a carpenter and her mother Leona a teacher. When Rosa was two, her parents separated. Rosa, her mother and younger brother Sylvester moved to their grandparents’ farm nearby.

Rosa’s grandparents were former slaves and Rosa lived in a world where it was normal for black children and white children to lead different lives. Rosa was taught by her mother, but at 11 went to live with an aunt in Montgomery to continue her education. When Rosa walked to the local school for African-American children, she saw the bus taking white children to the ‘better’ school in town. Rosa studied hard, but had to leave school at 16 to care for her dying grandmother and her sick mother. To support the family, Rosa learnt to type and began sewing.

At 19, Rosa married Raymond Parks, a barber. Raymond encouraged Rosa to return to high school to gain her diploma. He was also involved in the NAACP (National Association for the Advancement of Colored People) and Rosa became the first woman to join the group in Montgomery. They wanted to do something about the treatment of black people and believed all Americans should be equal, regardless of their colour. At the time, southern states followed ‘Jim Crow laws’ giving ‘separate but equal’ status to African Americans. In reality this meant cities were segregated (divided). White and black people went to different schools, shops, libraries, restaurants, theatres and churches. They even had to use different toilets and drinking fountains.

Rosa worked as a seamstress at a department store in the city. When she took the bus to work, she had to use seats reserved for black people at the back, or stand (even if there were empty seats up front). Then on 1 December 1955 everything changed. Rosa was taking the bus home when a white man boarded. With all the seats taken, the bus driver told Rosa and some other African Americans to stand up. The other three moved, but Rosa refused. When the driver threatened to call the police, Rosa sat still. 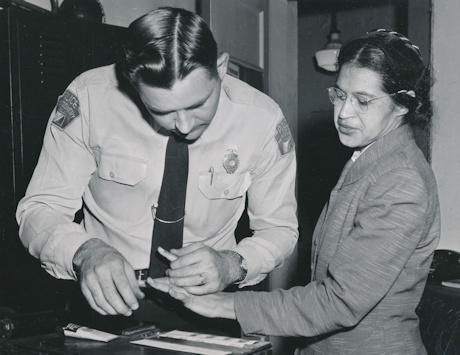 Rosa was arrested for breaking a segregation law and had to pay a fine. She refused, taking her case to the high court, because she believed the law was wrong, not her behaviour. Other leading African Americans, including Martin Luther King Jr, supported Rosa and decided to boycott (stop using) the city’s buses. They encouraged other African Americans to do the same. On the day of Rosa’s trial, 90 per cent of Montgomery’s African Americans (about 40,000 people) boycotted the buses, choosing to walk to work, or taking bicycles or shared cars and taxis. The boycott lasted 381 days and the bus companies lost a lot of money. Eventually the bus segregation laws in Alabama were changed and African Americans were free to sit wherever they chose.

Rosa’s actions and the demonstrations that followed showed that non-violent mass protests could make a difference. As a well-spoken, respected working woman, Rosa’s voice was heard, and by challenging the law she inspired a wider civil rights movement across America. This eventually led to the Civil Rights Act of 1964, ensuring equal rights for all Americans and making segregation in public places unlawful.

After the bus boycott, however, Rosa’s life was difficult. She and Raymond lost their jobs and were threatened by people who didn’t agree with their views. They moved to Hampton, Virginia, and later to Detroit, Michigan, where they continued supporting the civil rights movement. In 1987, they also set up a centre in Detroit helping young black people to find job opportunities – the Rosa and Raymond Parks Institute for Self Development. Rosa also wrote a number of books about her life.

Rosa died of natural causes in 2005 at the age of 92. Over 50,000 people attended her memorial service in Washington, D.C. and her body lay in state in the US Capitol (a great honour). She had no children and Raymond and her brother Sylvester had already passed away.

Today, Rosa is remembered as a symbol of freedom and equality, and for her courage and bravery that led to great change. As the Rev. Jesse Jackson said on her death “She sat down in order that we might stand up. Paradoxically, her imprisonment opened the doors for our long journey to freedom.” 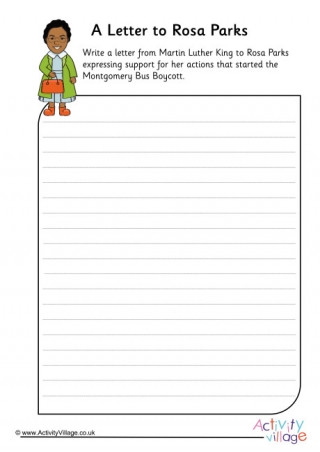 Following Rosa Park's brave actions, Martin Luther King was chosen to be the face of the official Montgomery Bus Boycott, beginning his time as the spokesman behind much of the Civil Rights movement. Can the children write a letter from him to Rosa expressing support for her actions? 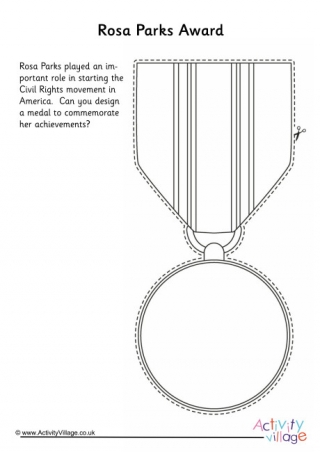 Rosa Parks was a brave but peaceful Civil Rights activist in America. Can the children design a medal to commemorate her achievements? 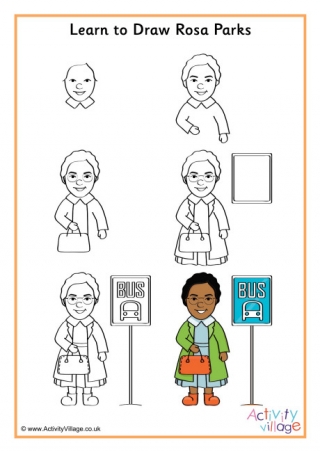 Our simple step-by-step guide will help the children learn how to draw Rosa Parks. 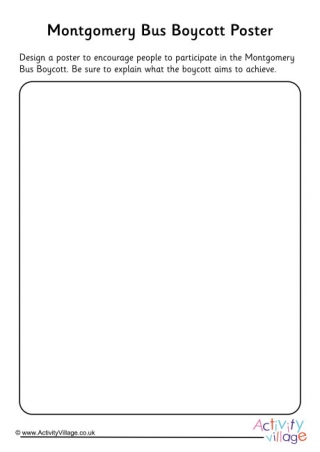 The kids will need to do some research and practise their persuasive language skills to design a poster encouraging people to participate in the Montgomery Bus Boycott. 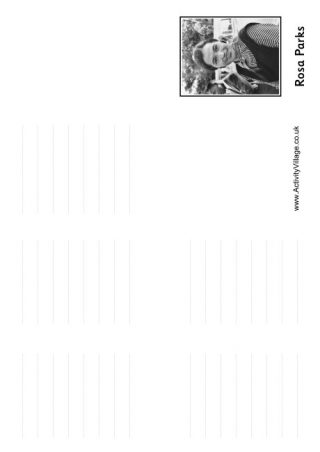 Use this Rosa Parks booklet to write down your notes whilst studying this inspirational woman. You'll need our Origami Booklet Folding Instructions found here. 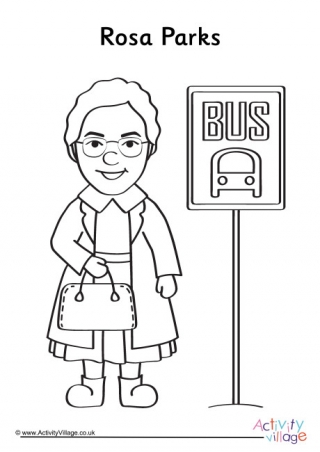 Our simple colouring page is the perfect way to introduce younger kids to the famous activist Rosa Parks. 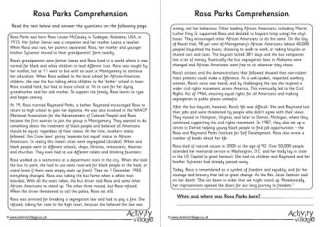 The kids will learn a little about Rosa Parks and practise their reading comprehension skills too with this worksheet. 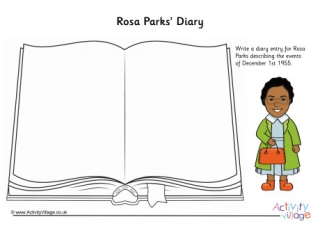 Can the children try to imagine how Rosa Park felt after the events of December 1st 1955 and write down a diary entry in her own words? 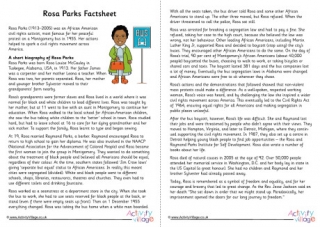 Learn a little about the life story of Rosa Parks and how she helped change the world for the better with our short introductory factsheet. 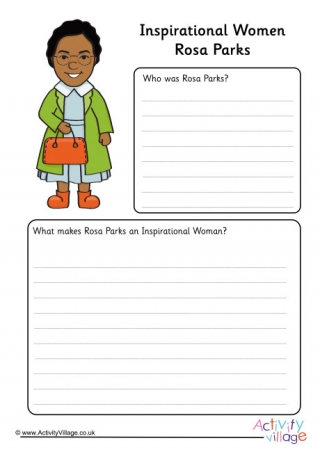 Rosa Parks is known for being an inspirational woman, but can the children find out a little bit more about her and record their findings on this worksheet? 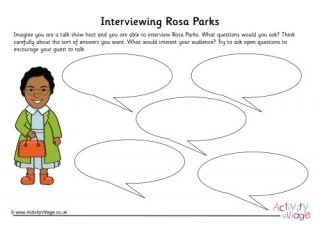 I wonder how Rosa Parks felt back on the famous day she refused to give up her seat on the bus in Montgomery? Perhaps this could be one question to ask if you could interview her - can you think of some more? 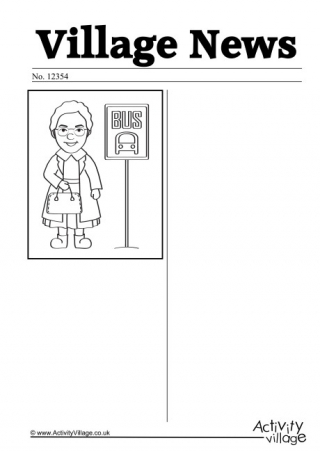 There are quite a few newspaper reports of Rosa Parks' arrest in 1955 that sparked the Montgomery Bus Boycott (you can find some of the original ones on online), but can the children try writing their own account on our newspaper writing prompt worksheet? 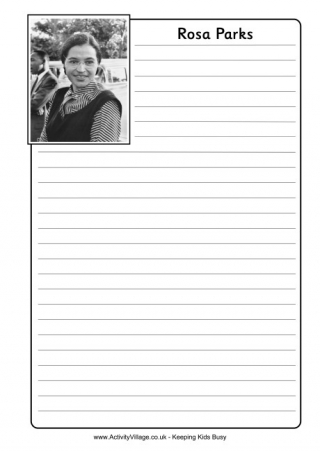 Use our handy notebooking pages to record everything you learn about Rosa Parks. 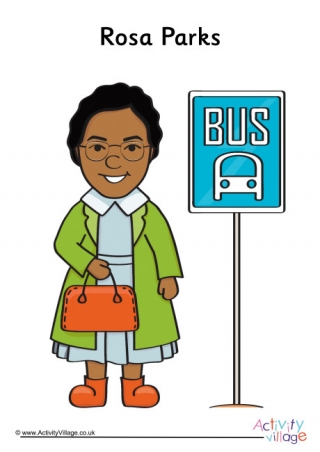 Print this cartoon-style poster of brave activist Rosa Parks to use as part of a classroom display. 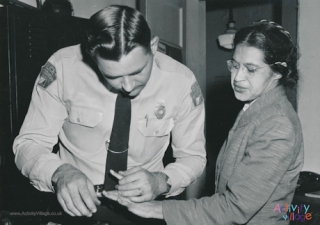 This famous photograph shows Rosa Parks being fingerprinted by a deputy sheriff after being arrested for boycotting public transportation in Montgomery, Alabama in February 1956. It might be a good starting point for discussion when learning about Rosa Parks and the Civil Rights movement. 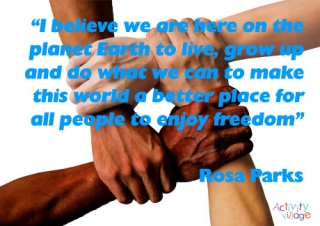 "I believe we are here on the planet Earth to live, grow up and do what we can to make this world a better place for all people to enjoy freedom". This simple but effective poster features an inspirational quote from Rosa Parks. 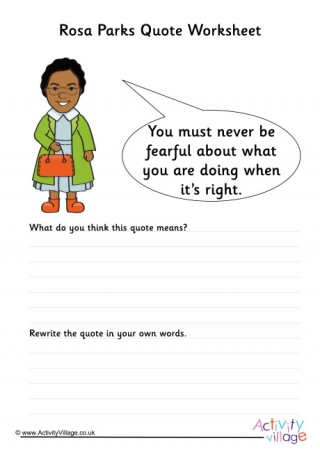 "You must never be fearful about what you are doing when it's right". Can the children write about what this quote by Rosa Parks means, and then rewrite it in their own words? 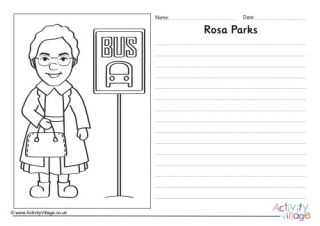 Write about Rosa Parks and her incredible achievements on this story paper. We have two versions to choose from: lined, and with handwriting lines. 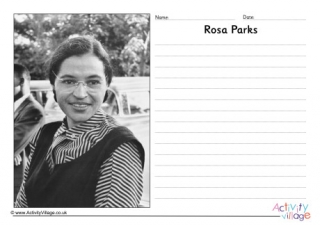 Our second Rosa Parks story paper is perfect for recording everything you learn about this remarkable woman. 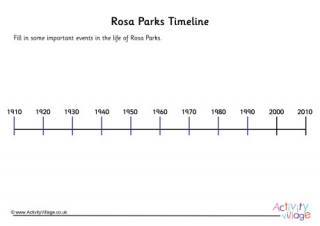 Fill in the important events in Rosa Park's life on this useful timeline worksheet. 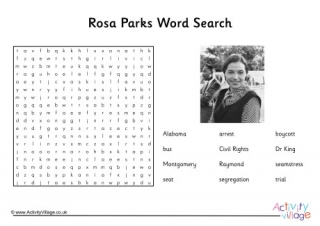 Ask the kids to try and find the words relating to Rosa Parks hidden in the word search grid as part of their studies on this inspirational woman. 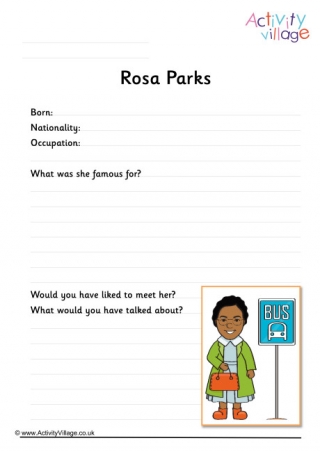 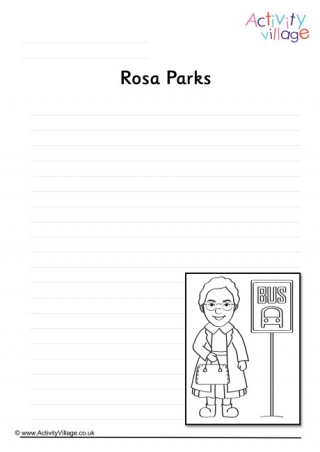 This Rosa Parks writing page is perfect for any writing project about the famous American Civil Rights activist. Available in colour, or black and white, below...