Galileo Galilei (1564–1642) was a brilliant Italian scientist, mathematician and astronomer. He was one of the first scientists to show that the Sun (rather than the Earth) is at the centre of our solar system, revolutionising our understanding of space. He also invented a new type of telescope, thermometer and compass. But Galileo’s life was not easy. Find out more about this ‘father of modern science’ and use our printable resources below to test your knowledge. “You cannot teach a man anything; you can only help him find it within himself.”

“All truths are easy to understand once they are discovered; the point is to discover them.”

“Mathematics is the language with which God has written the universe.”

A Short Biography of Galileo Galilei

Galileo Galilei was born in Pisa, Italy, in 1564, the first of six children born to Vincenzo Galilei and his wife Giulia. Galileo’s father was a famous musician and composer.

When Galileo was 10, his family moved to Florence and he went to school at the nearby Camaldolese Monastery. As a young man, Galileo thought he wanted to become a priest but he later followed his father’s wishes to study medicine at the University of Pisa.

Galileo was fascinated by the world around him. During his student days, for example, he watched a cathedral chandelier swinging in the breeze. He compared the movement to his heartbeat and noticed that the chandelier took the same amount of time to swing back and forth, however far it swung. He tested out this theory at home, using two pendulums of equal length. When one swung with a large sweep and one with a small sweep, they kept time together.

Galileo began developing other mathematical theories about motion. He proposed that objects of the same size fall to the ground at the same speed regardless of their mass, and that they steadily accelerate. Every time Galileo came up with a new theory, it was difficult to persuade people of his views. But this just spurred Galileo on! He became one of the first scientists to repeat experiments again and again to prove the worth of his principles. His ‘scientific method’ of proving a hypothesis is now widely used in science today.

In 1609, Galileo developed a more powerful telescope that increased magnification from 3x to 30x, helping to see further into space than ever before. Galileo supported the theory of Polish scientist Nicolaus Copernicus (who died before Galileo was born) who had suggested the Earth revolves around the Sun. Galileo observed the phases of Venus as it orbits the Sun, was the first to see Jupiter’s moons, and to see the difference between planets (which appeared as small discs) and stars (which appeared as points of light). He also discovered that our own moon is covered in craters. Galileo published many of his observations in a scientific paper called ‘The Starry Messenger’ in 1610, and later wrote a book explaining his views.

Galileo’s findings were very controversial at the time, and were greatly opposed by the Catholic Church, who believed the Earth was the centre of the Universe. In 1633, he was put on trial for his views and found guilty of heresy (opposing the views of the church). He was sentenced to life imprisonment, but served most of his sentence at home under house arrest. Although Galileo was forbidden to write or teach about his work, he kept on working and studying, even when he went blind in later life. Some of his booklets were secretly sent to other European countries.

Galileo never married but had three children (Virginia, Livia and Vincenzo) with a woman called Marina Gamba. His two daughters became nuns. After his death in 1642, at the age of 77, the Catholic Church expressed regret at Galileo’s treatment – although he wasn’t officially pardoned until 1992! Can you design a medal for Galileo Galilei in recognition of his many achievements? Print and fold this useful Galileo Galilei booklet (using the instructions found here), then use it to record your research. Here's a reading comprehension all about Galileo Galilei, great for challenging older kids... Here you will find some interesting facts all about Galileo Galilei - read through the factsheet to learn a little more, then perhaps try some of our activities about this brilliant man. I'm sure there is a lot we could all learn from an interview with Galileo Galilei! This worksheet asks the children to imagine they could interview him for a talk show - can they think of some good open questions? Our newspaper writing prompts are a great introduction to writing newspaper-style reports, and we've got lots to choose from! This one is for famous astronomer Galileo Galilei. Download our Galileo Galilei notebooking pages to write about this remarkable man and his achievements. Our simple posters are perfect for introducing famous people to younger children. Print this fun poster of Galileo Galilei and use in displays and topic work. This wise quote by Galileo Galilei is set against a beautiful photograph on this quote poster. Print using the borderless settings on your printer for the best results, and you can even frame the poster if you like. This fun quote worksheet is a great way to introduce the kids to Galileo Galilei and an opportunity to discuss one of his famous quotes in a little more detail... Use our story paper to write about Galileo Galilei - and of course, children can colour in the picture of the famous Italian astronomer, scientist and philosopher too... Use our Galileo Galilei story paper to record research, do some copywork or write a creative story based on this fascinating man. Learn a little about Galileo Galilei and then put the key facts of his life on this timeline. 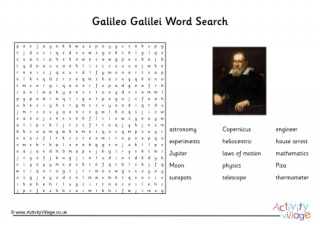 Can you find all 15 words about Galileo Galilei? Have a competition with your classmates and see who can find all 15 first! The kids can find out some facts about Galileo Galilei and then fill in this fun worksheet. 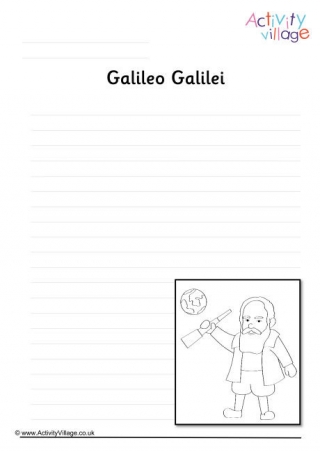 Here's a simple writing page for Galileo Galilei, ideal for younger children and available in colour or black and white. 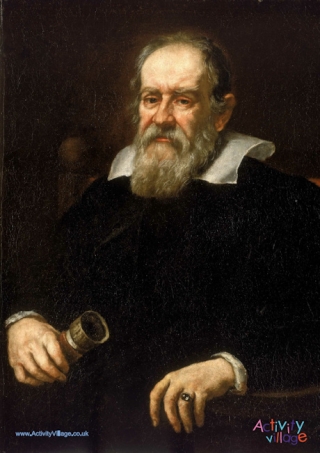 Here is a useful printable poster of the portrait of Galileo Galilei done in 1636 by Justus Sustermans. Galileo was placed under house arrest because his scientific beliefs went against those of the Catholic Church. Can the children imagine they are Galileo and write an entry in his diary during this time? They might need to do a little research first... Just for fun, let the kids have a go at drawing Galileo Galilei and his telescope! This fun worksheet asks the kids to find out some things that have been named after Galileo, then for extra fun asks them to list things they would like to be named after them! Get the kids having fun with science with the help of this experiment worksheet. Can they test Galileo's theory of motion, then record the results too?