Maria Sibylla Merian (1647–1717) was a German naturalist and illustrator who dedicated her life to the study of butterflies, moths and other insects. Her careful observations and artistic talent revolutionised our understanding of insects, showing details of both their behaviour and their life cycles. Living at a time when women didn’t have careers, Maria made a profession of her own and was extraordinary in her curiosity, talent and determination. Find out more about her unique life and enjoy using our printable resources below. 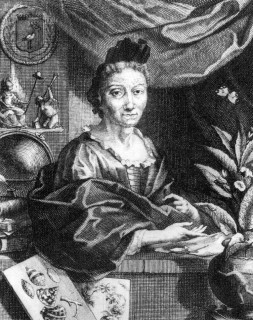 “In my youth, I spent my time investigating insects.”

“Art and nature shall always be wrestling until they eventually conquer one another so that the victory is the same stroke and line: that which is conquered, conquers at the same time.””

Maria Sibylla Merian was born in Frankfurt, Germany, in 1647, the ninth child of famous German artist Matthäus Merian. But Maria’s father died when she was three, and her mother remarried. Maria’s stepfather, Jacob Marrel, was a still-life artist who encouraged the young Maria to sketch and paint. Maria would gather plants, flowers and insects as her subjects and was particularly fascinated by caterpillars. She would collect the creatures and watch them for days, weeks and months as they transformed into moths and butterflies, a process known as metamorphosis.

As a teenager, Maria began to study other insects in great detail. She would capture and keep silkworms at home, for example, to study their life stages. She made amazingly accurate observations and illustrations of her findings.

At 16, Maria married Johann Andreas Graff, one of her stepfather’s pupils. Johann was nearly 30 years old and the marriage wasn’t happy, but they had two daughters together, Johanna and Dorothea. They moved to Johann’s hometown of Nuremberg where they stayed for 14 years. It was during this time that Maria published her first major work, a ‘Book of Flowers’ (1675).

A year after Dorothea was born, Maria published ‘The Wondrous Transformation of Caterpillars’ (1679) – a book containing nearly 20 years of her observations. At the time, people thought insects ‘generated’ from decaying matter – that maggots came from rotten meat, for example, or caterpillars from cabbages. Maria was the first to show that insects are in fact born from eggs. She also showed the life cycle of moths and butterflies and the way insects feed and live on plants. Naturalists had previously just shown insect specimens pinned against a white background.

After her stepfather’s death in 1681, Maria and her family returned to Frankfurt to support her mother. But when Maria and her husband later separated, she moved to Holland with her mother and two daughters to live with a religious group. On her mother’s death in 1691, Maria and her daughters moved on to Amsterdam where they set up an art studio, painting birds, insects and flowers. Maria became very successful in her field, but was restless and curious to learn more about insects in their natural habitat. At the age of 52, she decided to continue her studies abroad.

Maria sold over 200 of her paintings to raise funds for the trip and with her youngest daughter Dorothea, boarded a ship to the Dutch colony of Surinam in South America. The journey took three months – a brave undertaking for two women of the time. They began to explore the tropical rainforest, recording and painting the insects, plants and animals they found along the way. They planned to stay for five years, but after two, Maria fell sick with malaria and had to return home. Dorothea stayed for the duration and Maria later published their findings. The book brought Maria recognition amongst naturalists, but some refused to believe her observations, such as the existence of bird-eating spiders, which were later confirmed true.

Maria died from a stroke just before her 70th birthday. On the day of her funeral, the Tsar of Russia, Peter the Great, bought her remaining original works. He also invited her daughter Dorothea to work as his scientific illustrator. Ten years later, Maria’s artwork was shown in the Kunstkamera – the first museum to open in Russia. Her unique observations are now found in museums and bookshops around the world – celebrating her outstanding contribution to the scientific study of insects. 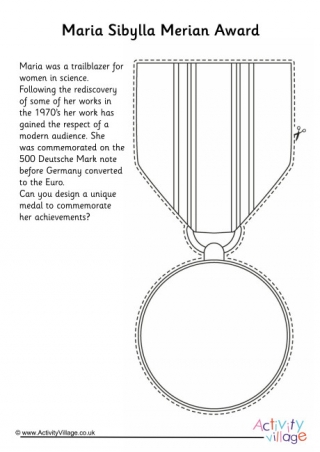 Although it took many years for her work to be recognised, Maria Sibylla Merian was commemorated on 500 Deutsche Mark note. Can you design your own award for her achievements? 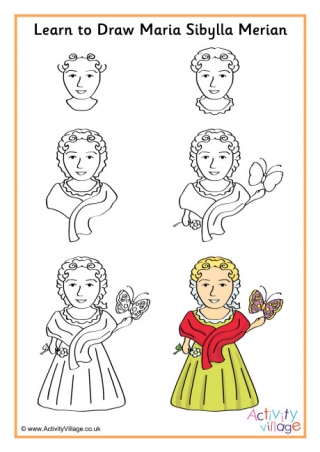 This easy step-by-step guide will help the kids learn to draw their own picture of naturalist Maria Sibylla Merian. 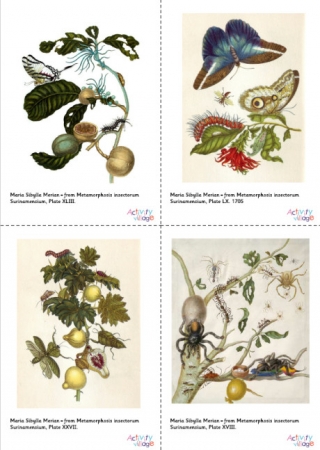 These beautiful artwork posters feature stunning illustrations of nature by naturalist Maria Sibylla Merian. There are four posters to print in this set, and they would look lovely displayed together in a group. Print and fold this little booklet then use it to write down some facts about Maria Sibylla Merian, or use for copy work. Folding instructions can be found here... 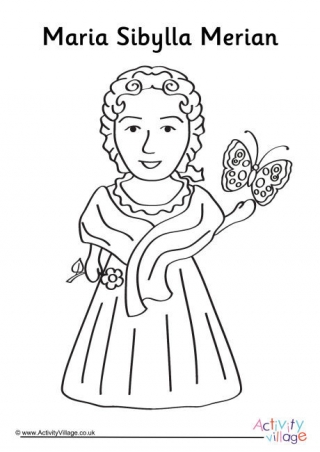 Colour in this picture of Maria Sibylla Merian, including a pretty butterfly too... Can the kids extract the relevant information from the text about Maria Sibylla Merian and use it to answer the questions on this comprehension worksheet? Can the children describe the metamorphosis of a butterfly using Maria Sibylla Merian's beautiful illustration to help them? The aim of this worksheet is to encourage the children to draw a plant or animal in detail, just like the drawings made by Maria Sibylla Merian. They need to be as scientifically accurate as they can! Maria Sibylla Merian dedicated her life to the study of butterflies, moths and other insects. Read about her life here, then try some of our activities based on her life and work. 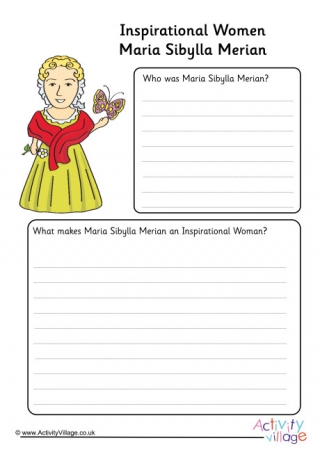 Can the children do some research on Maria Sibylla Merian and find out what makes her an Inspirational Woman? Our interview worksheets are a great way to bring famous people and historical characters to life, by asking the children to think of some questions for a talk show interview. This worksheet features Maria Sibylla Merian - what would be some good questions to ask her? 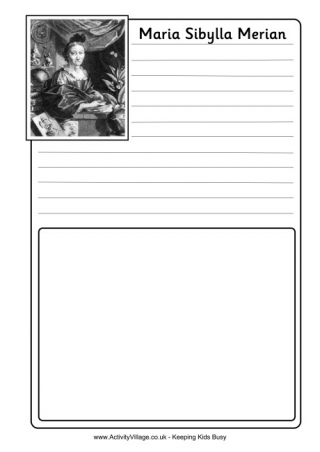 What do you know about naturalist Maria Sibylla ? Present your work on one of our notebooking pages. 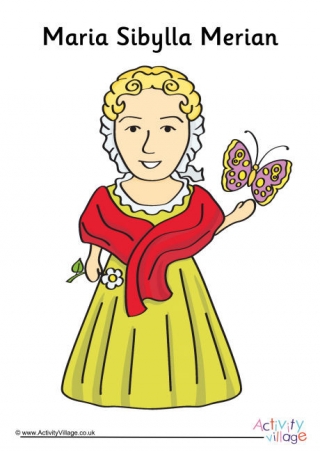 This colourful poster of Maria Sibylla Merian holding a beautiful butterfly is perfect for classroom displays... 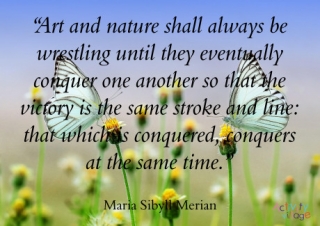 We've added a quote by Maria Sibylla Merian to this beautiful, summery photograph of two butterflies to create a lovely quote poster for displays. 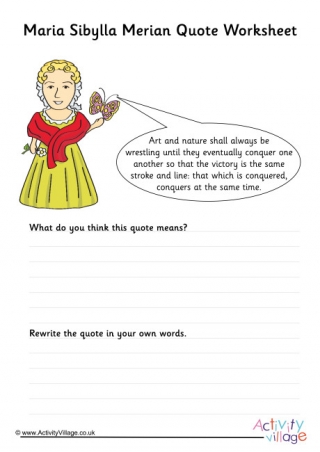 Here's a simple quote worksheet that's ideal for younger children. Can they write about what the quote by Maria Sibylla Merian means, then rewrite it in their own words? 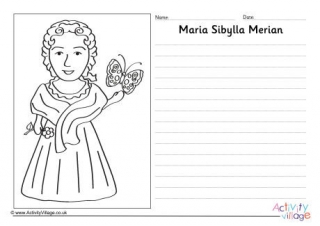 Write about Maria Sibylla Merian on our story paper, or perhaps write about your own insect or wildlife studies? 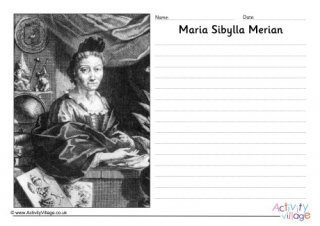 Write down everything you have learned about Maria Sibylla Merian on this story paper, which features her portrait. 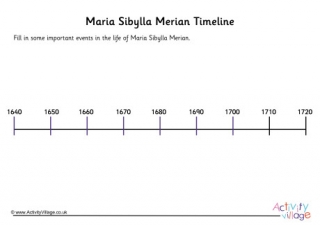 Maria Sibylla Merian's first published book was called a 'Book of Flowers' - a date to add to this timeline worksheet, perhaps? 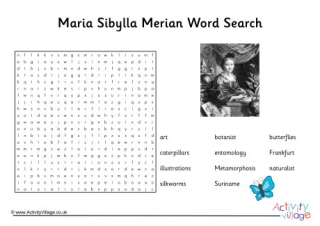 There are some quite long words to find on this Maria Sibylla Merian wordsearch puzzle, but perhaps that makes them a little easier to find in the grid? 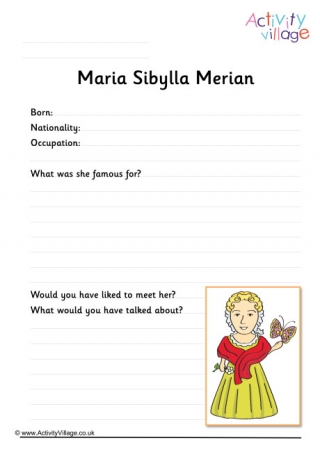 Can you find out some key facts about Maria Sibylla Merian and fill them in on this simple worksheet? 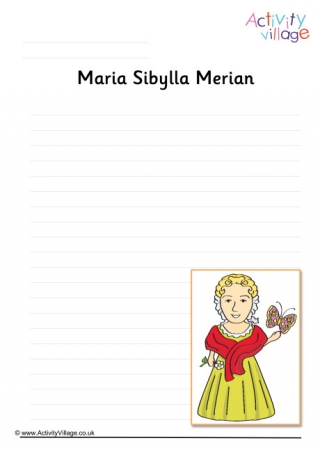 Our writing pages are a fun way to start younger children researching and writing about famous people. This writing page is about Maria Sibylla Merian, one of the first naturalists to observe insects directly.