From the Kalahari Desert to the Sossusvlei Dunes to the Skeleton Coast - Namibia is a country of sand and superlatives! Find out more and enjoy our printable activities and flags. 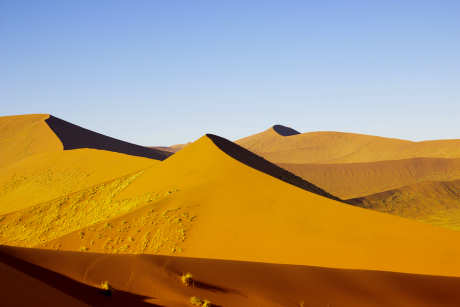 Sossusvlei Dunes in the Namib Desert 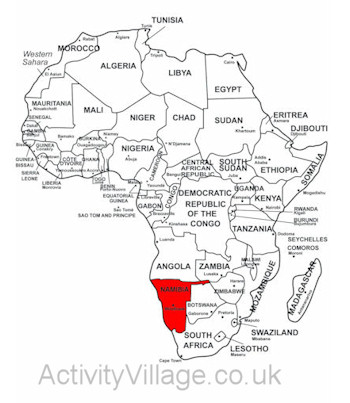 Namibia on a map of Africa - print this map here 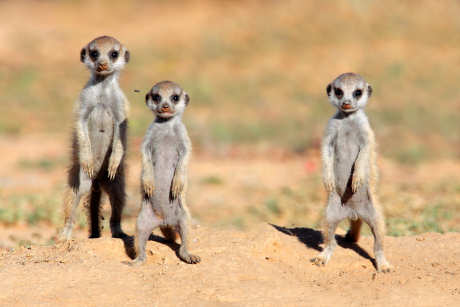 Meerkat babies in the Kalahari Desert 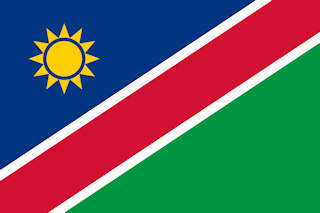 The flag of Namibia was adopted in 1990, when the country became independence from South Africa. The gold sun represents life and energy. The red stripe represents Namibia's most important resource - it's people, and their determination to build a future of equal opportunity for all citizens. The white represents peace. The green stripe is for the country's agriculture and the land, while the blue is for the clear blue sky and the Atlanic Ocean. 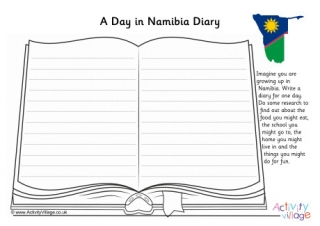 Imagine you are growing up in Namibia - what would a typical day be like? Write about it here in this diary... 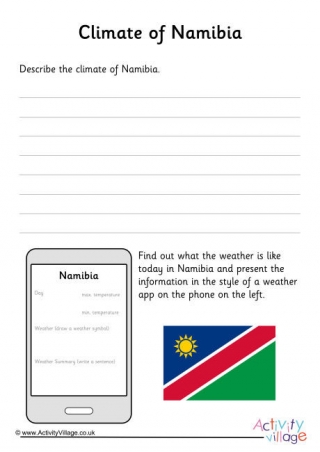 Find out about the weather and climate in Nambia then complete this fun climate worksheet. 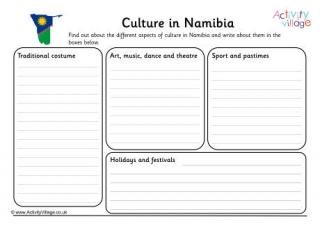 Music is very popular in Namibia and there are plans to open a museum dedicated to the music of Namibia. Can you find out more, along with other aspects of Namibian culture, and record what you find on this worksheet? 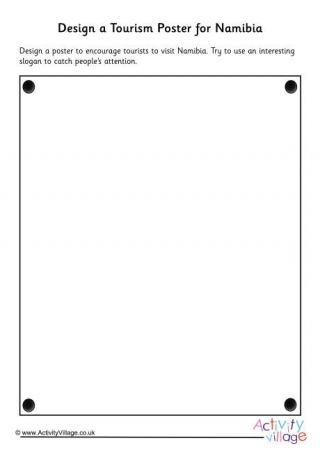 Over one million travellers visit Nambia every year! Can you design your own tourism poster encouraging people to visit? 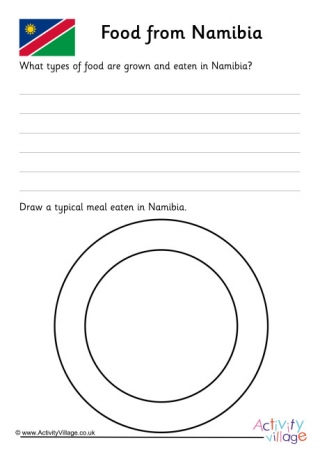 Do some research into the food grown and eaten in Namibia then write about it on our worksheet. Can you draw a typical Namibian meal too? Each country of the world has a coat of arms or emblem as a national symbol of their country. This one is for Namibia, and we have two worksheets to choose from - both ask you to write about the coat of arms, and the second also asks you to design your own too. This Venn diagram helps the kids learn what they have in common with children living in Namibia, and to understand the differences too... 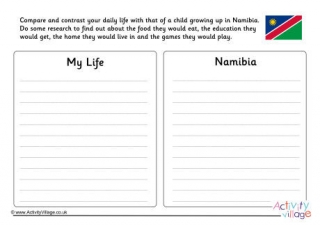 The ability to compare and contrast is an important skill for kids to learn, so help them practise with this Namibia Compare and Contrast worksheet. Choose from our guided (easier) and blank (harder) location worksheet, and ask children to find Namibia and its capital on the map of Africa. The Welwitschia (Namibia's national flower) might not be the prettiest flower to look at, but these plants are famous in Namibia and certainly make an interesting colouring page! Our map shows the location of Namibia within Africa, as well as its capital city. It's useful to see how Namibia fits into the continent as a whole. The weather certainly looks good on this postcard of Namibia! How else would you describe a visit to this country for somebody back home? Write a postcard to tell them about it... This fun postcard activity asks the kids to imagine they are visiting Nambia, and to write all about their visit for a friend back home. Can they draw a picture of something they might see there too? Print this poster of Namibia (using the borderless settings on your printer for the best results), then display to admire the stunning landscape and blue sky... These clever but simple posters combine the national flag and the outline shape of the country too - this poster is for Namibia... This stunning picture of Namibia is bound to inspire the kids to do a little creative writing! We have both lined, and handwriting lines versions to choose from below... Namibia is a large country with plenty to see and do. Can the children add some useful information for tourists in this leaflet? 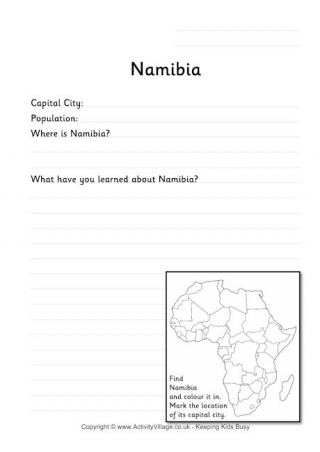 Find out some facts about Namibia and fill out this fun worksheet, which also gives you a change to remember exactly where Namibia is placed within Africa. Pack our virtual suitcase ready for a trip to Namibia, thinking carefully about everything you'll need to take... Find out about the animals and plants of Namibia and write and draw about them here. The Etosha National Park alone harbours 114 mammal species, so there's plenty to choose from! Shipwrecks on the Skeleton Coast of Namibia