Ned Kelly (1854–1880) is Australia’s most famous bandit of old! Although he was a dangerous killer and criminal he also has the status of folk-hero as he represented the poor man’s fight for survival in a world that favoured the wealthy. Learn more about this famous Australian outlaw and use our collection of printable resources below to test your findings. 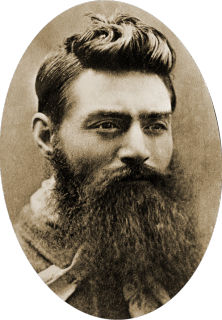 “Ah well, I suppose it has come to this.”
“Such is life.”
Supposedly Ned Kelly’s last words

A Short Biography of Ned Kelly

Ned Kelly was born in Beveridge, Victoria, Australia in 1854, the third of eight children, to John Kelly and his wife Ellen Quinn. Ned’s father was an Irishman, sent to Tasmania in 1841 for stealing two pigs.

When Ned was 12 his father died, and, as the oldest boy in the family, Ned left school to work on his grandfather’s farm. Ned’s family were poor, and during his teenage years Ned fell into trouble with the law. At 14, he was arrested for allegedly attacking and robbing a Chinese pig farmer. At 15, he was detained for helping a bandit called Harry Power. Both charges were dropped, but Ned had caught the eye of the police. In 1870, he served six months hard labour for assault, and was then arrested again for having a stolen horse and served another three years hard labour.

As they grew older, Ned and his brother Dan got involved in cattle rustling. When a police constable visited the Kelly home in 1878 to arrest Dan, a fight broke out. Constable Fitzpatrick claimed Ned shot him in the wrist (although no one knows for sure). Ned and Dan went into hiding and were joined by their friends Joe Byrne and Steve Hart. Meanwhile, Ned’s mother, brother-in-law and a neighbour were arrested for assisting the attempted murder of a policeman. They all served time in prison.

While Ned and his gang were on the run, they heard news of four policemen trying to track them down. The gang found horse tracks leading to a police camp at Stringybark Creek, and ambushed the policemen, killing three of them. From then on, the ‘Kelly Gang’ were proclaimed outlaws. The Victorian government offered rewards of £500 for each of them, dead or alive – a figure later increased to £2,000 a man.

The gang were on the run for about two years, thanks to the help of their supporters. They began making suits of bulletproof armour from farm machinery parts – some metal was bought, some was given to them, and some stolen. In 1879, the gang robbed two banks to fund their activities. During one raid, Ned gave a letter to the bank’s accountant explaining his actions. He criticised the police, the Victorian government and the British colonial rulers, and demanded justice for the poor. He explained that his situation had forced him into a life of crime, and protested at the unfair persecution of his family by the police.

The following year, the gang visited the town of Glenrowan and took people hostage at a hotel. The police caught up with them this time, surrounding the hotel for a shoot-out lasting several hours. All members of the gang died, except Ned who suffered leg wounds. He survived to stand trial, and although thousands of people protested for his release, he was sentenced to death by hanging.

Ned was just 25 when he died. It was a short life, but it’s fair to say that his legend will last for generations. 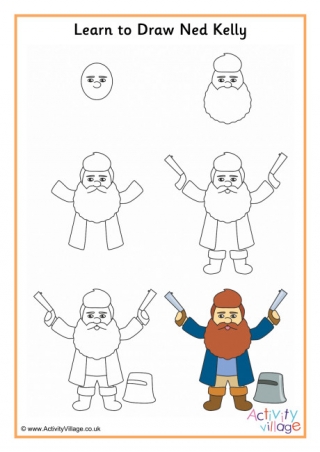 Learn to draw Australia's most famous bushranger, Ned Kelly, using our easy step by step drawing guide - then colour him in! 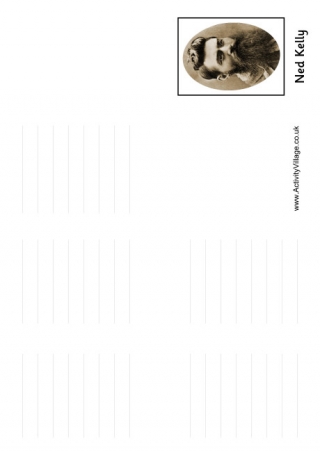 We have lots of booklets featuring all kinds of famous people here at Activity Village, so you can build your own small library over time. 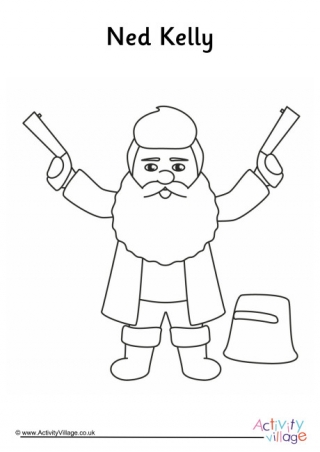 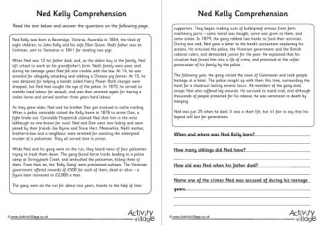 This comprehension worksheet all about Ned Kelly is an interesting read for older kids - but can they answer the questions at the end correctly once they've read the text? 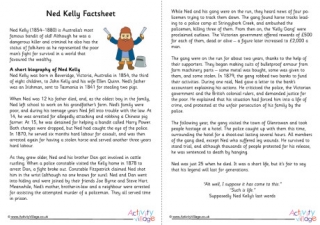 You may have already heard of Ned Kelly, but learn a little more about him and his short but interesting life with our easy to read factsheet. 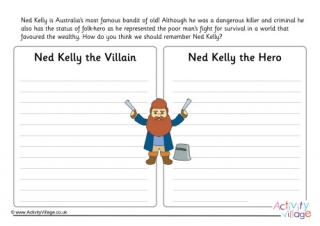 Ned Kelly was a bushranger (bandit) of the Australian Outback. The poor people thought he was a hero as he stood up for their rights, but the landowners and farmers though he was criminal. 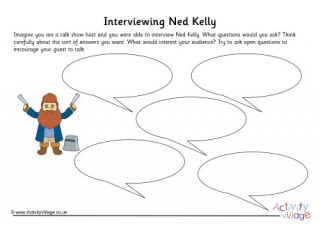 Ned Kelly would have made a very interesting talk show guest! Can the children think of some good open questions they could ask him if they had the chance? 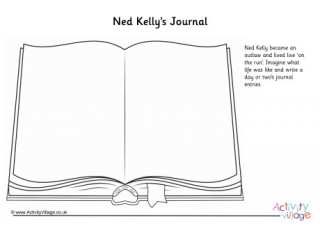 Here's an interesting writing project for the kids - can they imagine what life was like as Australian outlaw Ned Kelly, and write about it in this journal? 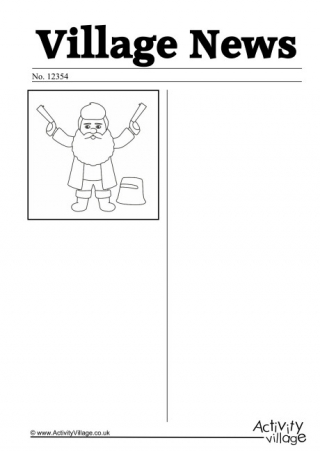 Maybe the children could use this newspaper writing prompt to write about the capture and trial of Ned Kelly, the Australian bushranger legend? 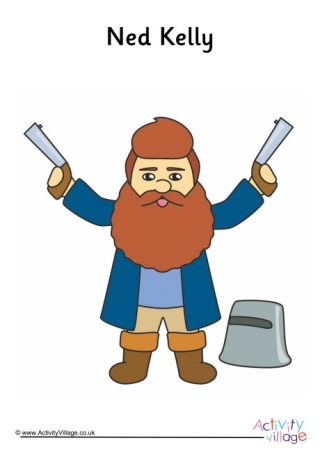 Here's an easy to print poster of Australian bushranger Ned Kelly, ready to print and use in projects or to display on a classroom wall. 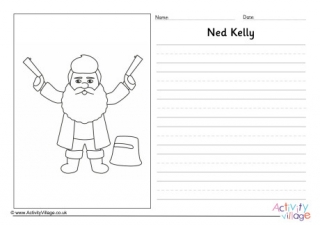 Ned Kelly was an interesting character and Australian legend, so he's bound to inspire some creative writing from the kids using this story paper! Choose from lined or handwriting lines. 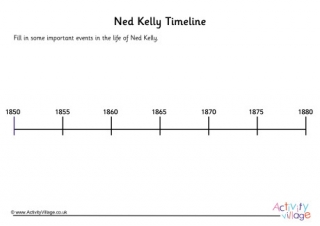 Ned Kelly only lived until he was 25 years old, but plenty happened in his short lifetime to add to this timeline worksheet! 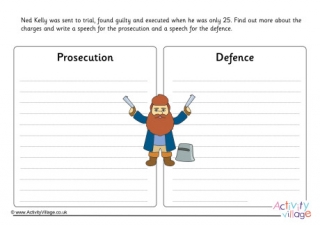 Here's a worksheet to help practise persuasive writing skills. Ned Kelly was sent to trial, found guilty and executed when he was just 25 years old. Can the kids do some research on the charges against him, then write a speech for both the prosecution and defence? 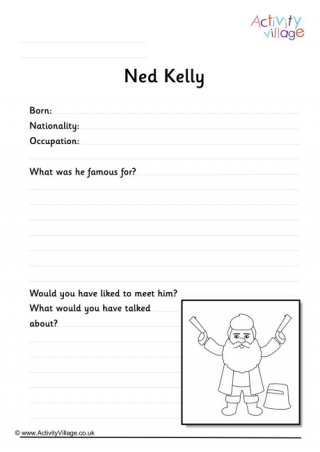 Here's a simple worksheet all about Ned Kelly, that encourages young children to do some basic research. Can the children fill in some facts about him, say if they'd have liked to have met him and what they'd have talked about? 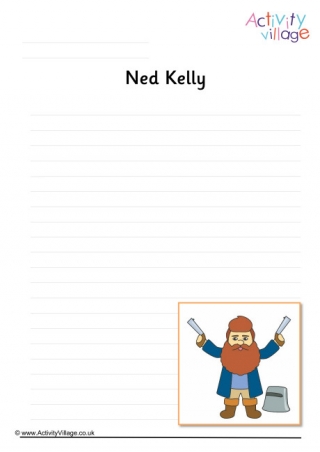 This writing page has lots of uses if you're learning about Australian legend Ned Kelly, and it's a perfect place to write down any information that the kids have found through their research. Choose between colour or black and white versions below. 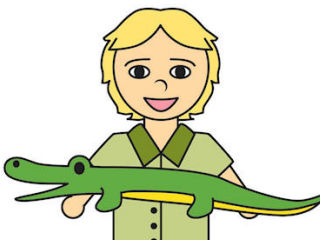