Here's a collection of printable activities for children about Steve Irwin, Australia's beloved "Crocodile Hunter" and self-proclaimed Wildlife Warrior. Steve was born in 1962 and grew up surrounded by animals and reptiles. In fact, when he was still a young boy, his parents built and opened the reptile park which is now the world famous Australia Zoo.

Steve married Terri and together they began to film a TV series, The Crocodile Hunter. It quickly became a hit all over the world and was the first of many successful TV ventures which brought the excitement of Steve and Terri's adventures to our living rooms.

Steve was passionate about the environment and endangered animals. He said "I consider myself a wildlife warrior. My mission is to save the world's endangered species." Sadly, in September 2006, Steve was pierced in the chest by a stingray spine while filming in the Great Barrier Reef, and died.

Fun fact: Steve was given a 12 foot scrub python for his 6th birthday - and at age 9 he wrestled his first crocodile!

"Where I live if someone gives you a hug it's from the heart."
Steve Irwin

15th November has been set aside to remember Steve and raise money for conservation. You can find out more about it here:
Steve Irwin Day (leaving Activity Village) 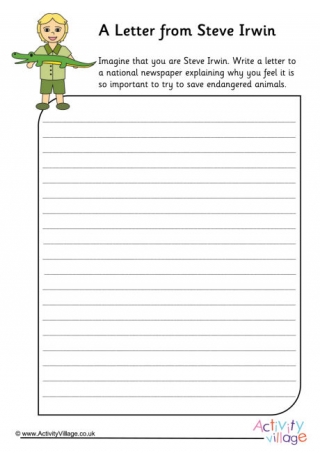 We ask the kids to put themselves in Steve Irwin's shoes for a moment and write a letter to an international newspaper explaining why it is so important to protect endangered species. 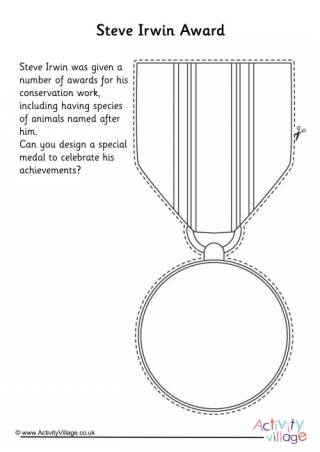 Steve Irwin received many awards during his life,  including the Centenary Medal for his services to global conservation and tourism, mostly thanks to his dedication to protecting Australian wildlife. Use our worksheet to design your own award to recognise his achievements... 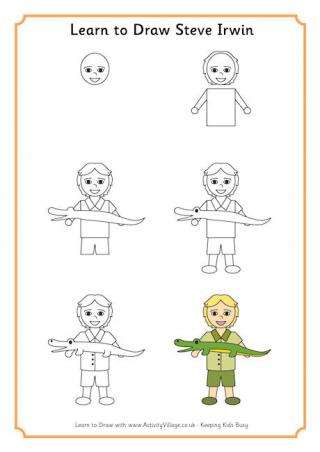 Just for fun, learn to draw Steve Irwin by following our step by step instructions! 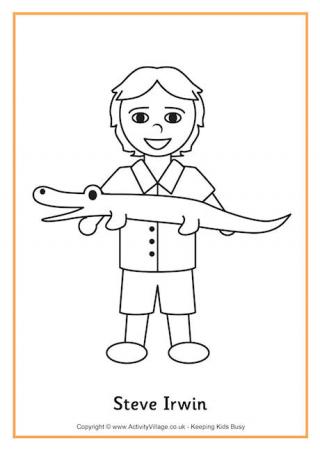 Was Steve Irwin one of your children's heroes? Here's a fun colouring page of Steve with one of his beloved crocodiles, aimed at younger kids. 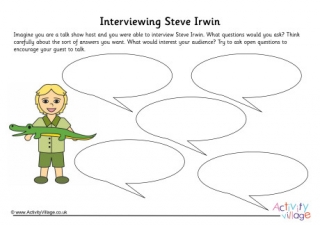 Imagine you were a talk show host and you could interview Australian conservationist and television personality Steve Irwin? Can you think of some open questions to ask him, maybe about his conservation work? What do you think the audience would like to hear? 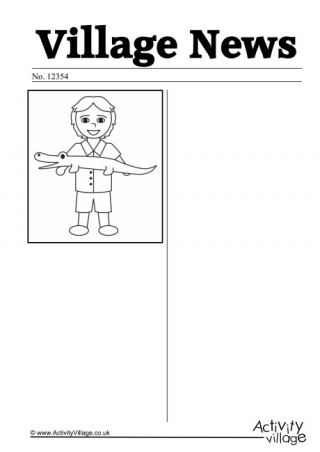 Ask the kids to write about Steve Irwin using our newspaper writing prompt. Perhaps they can write about some of his successful conservation work? 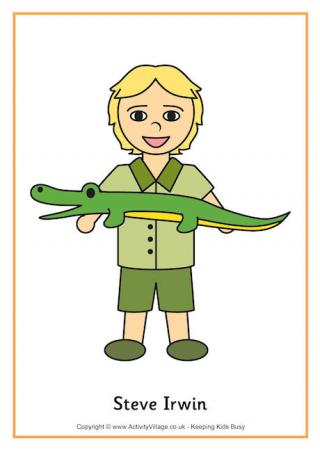 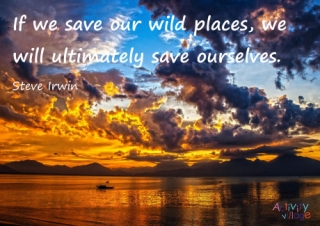 "If we save our wild places, we will ultimately save ourselves." This quote poster features the words of famous conservationist Steve Irwin set against a scenic backdrop. 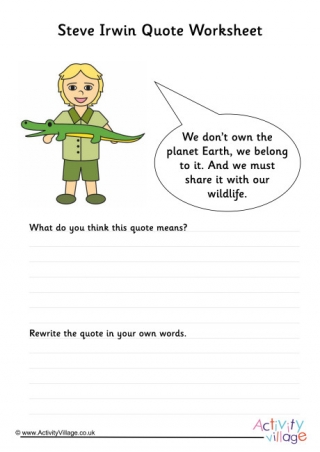 Here's a simple worksheet featuring a quote from Australian conservationist and TV personality Steve Irwin. Can the kids write about what he meant by the quote, and then rewrite it in their own words? 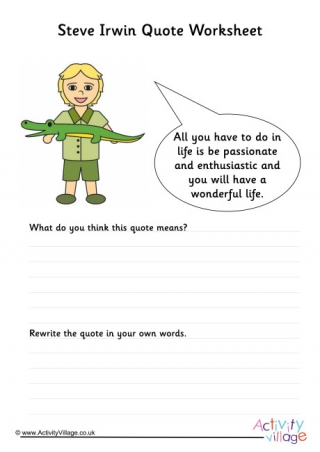 "All you have to do in life is be passionate and enthusiastic and you will have a wonderful life." This simple worksheet features a great quote from the Australian conservationist Steve Irwin, and asks the children to write about what they think the quote means and to rewrite it in thei 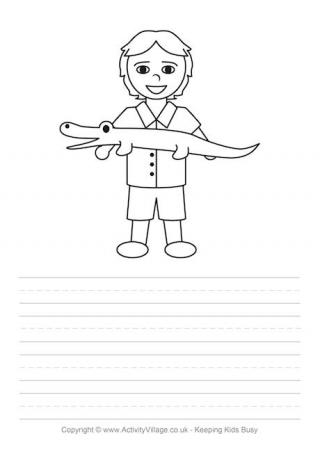 Use this fun Steve Irwin story paper as a writing and colouring activity for the kids. Perhaps they can write about an adventure that Steve enjoyed - or one that he might have - or copy out some of his sayings. 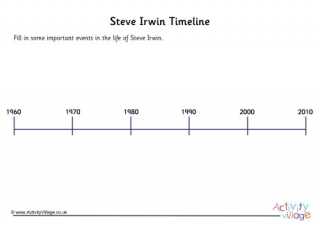 Ask the kids to mark the important events in Steve Irwin's life on our timeline worksheet. 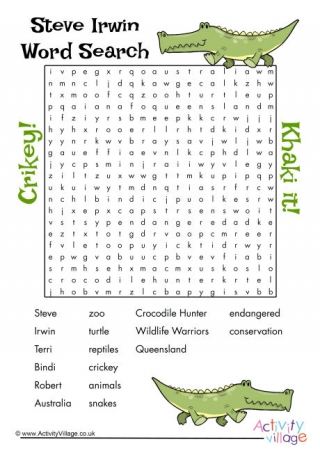 Wildlife Warriors will find plenty of related words to find in this word search, including Steve's family and many other things that were important to Steve Irwin and those that remember this man that inspired so many - kids and adults too. 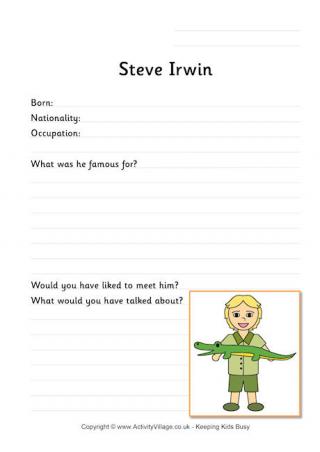 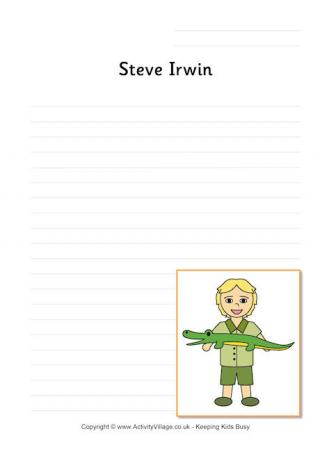 Use this writing page (available in colour or black and white) to write about Steve Irwin. 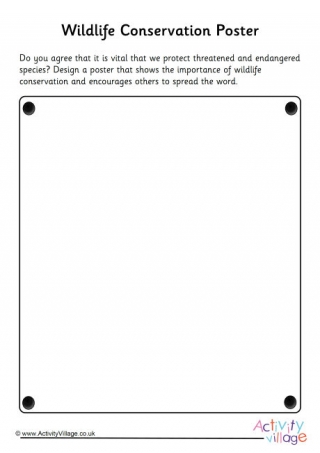 Design a poster which explains the importance of wildlife conservation. You might include pictures of endangered species - or design a poster that shows the world without them. 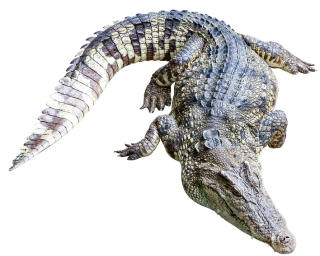 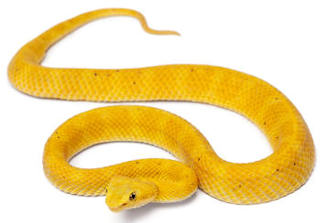 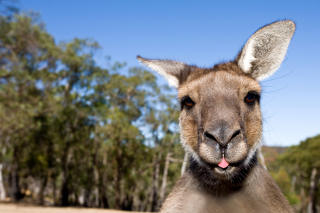