You can use our Women’s World Cup tracker chart to play your own version of the tournament, using our printable spinners or some dice to decide the result of matches.

Print out the Tracker chart, and the Spinners. You will need to print these on card or stick them on to card after you have printed them on paper. Cut the spinners out and push a matchstick or small pencil through the centre of each.

The numbers on each part of the spinner show the number of goals that team might score in a match. To make the game more realistic, the spinners have been designed so that better teams are more likely to score than the outsiders.

Start the tournament at the Group stage. Choose the spinners for the two teams involved in each match, spin to find the final score, then record that on the Tracker chart.

Now you put all the teams that have qualified from the Group stage into the next round. The qualifying teams are all the Group winners and runner ups plus the four best third-placed teams. Again, you can decide who the best third-placed teams are by looking at points, then goal difference, then goals scored. Our Tracker chart makes it easy to put the teams in the right match - for example, you can see where the Winner of Group A should be written in. The official rules for which match the third-placed teams play in are very complicated, but it's fine just to write these teams into the Third Place boxes, making sure that a team is not playing a team it has already played in the Group stage. Playing the remaining rounds should be straightforward.

You can play a simpler version of the game by following the rules above but using a dice to decide how many goals a team scores in a match. 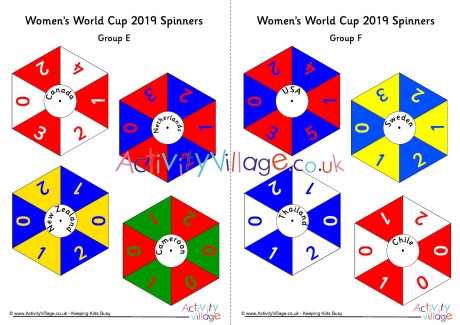 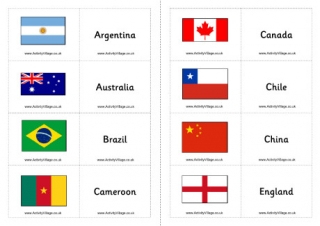 Practise your knowledge of flags with these flag matching game flash cards. There are 24 nations taking part in the Women's World Cup 2019, and the aim of the cards is to match the name of the country to right flag. 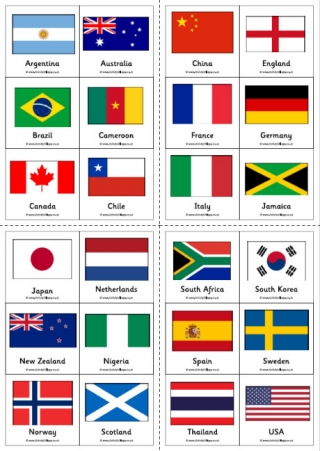 Our Women's World Cup 2019 flag cards have the name of each country under the flag, print six to a page and are perfect for all kinds of displays and games. 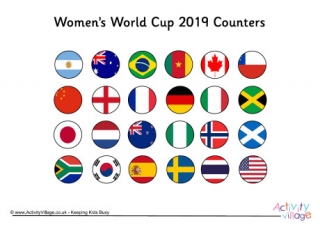 We've created these Women's World Cup 2019 counters so they can be used with our popular football game found here. You can also use them with our sorting mats or stick them onto wall charts.